Kiribati president: My people are the polar bears of the Pacific 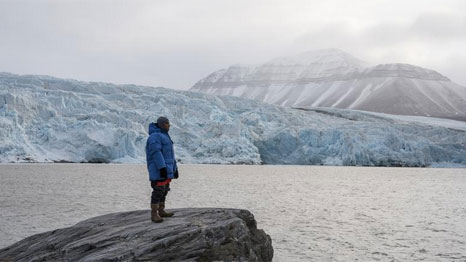 The case has been made with science, with doomsday predictions, with emotional pleas.

But so far none of it has been enough to convince the world to save Kiribati, the 33 tiny islands in the Pacific ocean so vulnerable to climate change that they could soon be nonexistent.

So Anote Tong, the president of the island nation, has taken to comparing himself to a polar bear.

Somehow, he said, these animals elicit more of a response than do the 100,000 human population of Kiribati when talking about the impacts of climate change.

“I know that in the past there was a lot of focus on the polar bears. In my attempt to get attention on our own situation I draw a comparison that what happens to the polar bears will also be happening to us in our part of the world,” he told RTCC.

President Tong had just seen a polar bear himself. He was speaking from the Arctic, where he was reviewing the impacts of climate change ahead of the landmark climate change summit taking place in New York today.

He said he can see how the bears, like the people of Kiribati, face the prospect of losing their homes very soon. The UN’s science panel recently asserted that it was “very likely” that the Arctic would be ice free in the summer by the middle of the century. Glaciers are also shrinking fast.

Kiribati needs global temperatures to be contained at below 1.5C if they are to survive into the next century. Currently, the target of international negotiations is 2C – and even this looks ambitious.

Although the islands of Kiribati, straddling the equator, are about the furthest a country can get from the poles, they are in line to feel some of the severest impacts, as sea levels are forced up by the melting land ice.

“I saw for myself with my own eyes the huge sheets of ice from the glaciers, and imagined that if that was to melt then obviously it’s going to mean a lot more trouble for us and a lot of trouble for other people,” he said.

Discussion of how Kiribati will cope have already transcended the academic into the practical. Earlier this year, president Tong finalised the purchase of 20 square kilometres of land in Fiji, 2,000 km away this year, which will help to ensure the country’s food security and could become a landing site for refugees.

The forecast looks bad for Kiribati. Under a business-as-usual scenario, the UN’s science panel predicts that the world could be around 5C hotter by the end of the century, while sea levels could rise by almost a meter.

Kiribati lies an average of two metres above sea level. Not only is the land vulnerable to erosion, but more severe storms would make life on the islands impossible.

This is what leaders must understand when they meet in New York today, says Tong.

“I have no choice but to engage with the debate. I have no choice because the future of my people is on the land. It’s very important the other leaders understand the way we feel and the challenges we face. It’s an issue that cannot solve itself. We’ve got to have good strong leadership here,” he said.

Because for the islanders, the debate is not about higher taxes, political ideology, or any of the other elements of the debate on climate change.

It is about culture, identity and life itself, says Tong.

“I don’t know how old I’ll grow to be, but I can guarantee you, I will live and die here, and if I need to build my own island I will try to do that.”