John Kerry: “Nature is screaming at us” on climate change 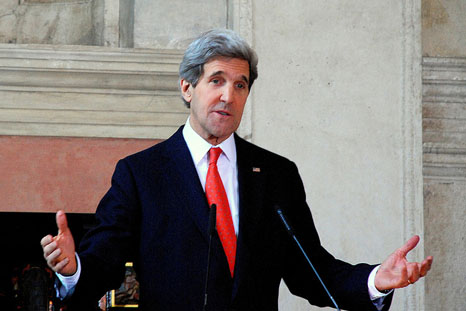 In an impassioned address to business leaders on the opening day of New York climate week, Kerry repeated his view that global warming is as serious a security concern as terrorism or weapons of mass destruction.

And he urged leaders attending a climate summit at UN headquarters tomorrow to “move and act now”, warning that nature was now “screaming” at the world.

“It’s about time leaders come to the UN,” he said. “I hope this summit will give leadership. We have a small window of time.”

In the first of what is expected to be a series of small announcements from Washington this week, Kerry said the US was giving US$15 million to the World Bank to help kickstart a new market-based scheme to curb methane emissions.

Methane is a potent climate warming gas, often released during mining and drilling for hydrocarbons. Vast quantities are also stored in the northern hemisphere permafrost and are released as the earth warms.

Kerry said he had instructed all 275 US foreign missions to make climate change their priority, putting it on the “front burner”.

He also confirmed the US intends to use the Major Economies Forum, which includes the world’s top 17 emitters, covering 80% of global carbon pollution, to pressure countries to cut their carbon footprints.

Foreign ministers linked to the MEF met in New York last night, a gathering Kerry said was significant because it was a sign that climate change is moving out of its environmental silo.

He said the group would meet again early next year, to ensure all members were fulfilling their emissions goals ahead of a proposed global agreement in the French capital in December.

“Well before Paris we need to make sure the major economies are putting forward their emission goals,” he said.

Kerry added that recent meetings with China had left him encouraged leaders in Beijing understood the risks and opportunities posed by climate change.

“If together we can state ambitious goals for next year, our hope is that can act as a major incentive for other countries,” he said.

The face of US foreign policy also said the economic case for change was powerful, pointing to a $6 trillion energy market and the need for $90 trillion of investment in cities over the coming decades.

But he said continuing deadlock in the US Congress was hampering the country’s efforts to develop a united plan to decarbonise. And he noted the lack of a national grid across the US limits the deployment of renewable energy projects.

In stinging attack on Republican opponents and leading fossil fuel companies ahead of the upcoming US mid term elections, he said continued efforts to undermine climate policies, particularly from coal companies, were unacceptable.

“We need to think hard about campaign contributions to outcomes… that is critical.”