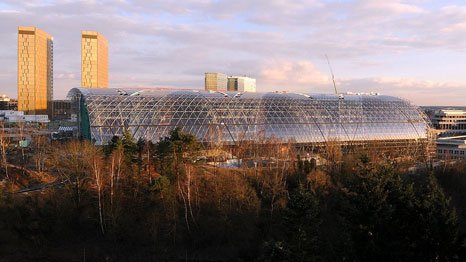 The European Investment Bank, based in Luxembourg (Pic: Forgemind ArchiMedia/Flickr)

Green Bonds are gaining momentum in the financial markets and are raising awareness among a growing number of investors about climate finance.

The European Investment Bank (EIB), a leader in the financing of climate action projects, has been a pioneer and an active promoter of Green Bonds and is committed to help further develop this market segment.

The inception of an active green bond market was catalyzed by multilateral development banks. They were responding to climate policy imperatives and the need to scale-up financial market involvement.

In July 2007, the European Investment Bank (EIB) launched the first ever Green Bond: it was named “Climate Awareness Bond” (CAB). The transaction pioneered the earmarking of proceeds to match disbursements for climate action projects, providing investors with an accountable link between climate action lending and funding.

Green Bonds have helped make green lending much more visible and transparent. This has, in turn, led to growth and diversification in investor demand.

One of the advantages of Green Bonds (linked to an existing issuer) is that investors take no project risk as their exposure is to the issuer and yields are the same as for the issuer’s standard bonds.

At the same time, however, investors have the possibility to monitor closely how funds are actually disbursed. This has helped issuers engage with a wider range of investors, and diversify their funding sources. Multiple positive feedback loops have thus led to increased awareness among all market players.

Huge capital investments and their effective deployment are required to achieve the 2C limit in global temperature increase scenario[1].This is especially true in the clean energy sector.

It is thus clear that a mobilisation of long-term capital at scale is going to depend on engaging conscious and proactive institutional investors, who between them own a pool of capital estimated at around US$ 80 trillion.[2]

Institutional investors have, relative to their size, had limited opportunities to exert influence over bond issuers regarding the actual deployment of funds. Green Bonds are an essential tool in furthering their useful involvement in this area.

State of the market

Benchmark issuance by the International Finance Corporation in USD and by the EIB in EUR created important milestones for further development of this market segment, which has reached US$ 25bn in total issuance this year.[3]

Following the example of supranational issuers, private sector borrowers have played an increasingly important role on the green bond market in 2014, mostly thanks to the surge in corporate issuance.

2013 and 2014 also saw the issuance of green city and municipal bonds. Cities and sub-sovereign entities (also in emerging markets) raise such finance in particular to meet climate infrastructure requirements.

The projects behind EIB’s Green Bonds

Energy-related emissions are a central driver of global warming, and so a key focus of climate action.

For EIB, projects in renewable energy and energy efficiency have been the exclusive focus of EIB Climate Awareness Bonds. Since the inception of the programme until end 2013, CABs have supported 55 projects in 19 countries across the globe.

Projects range from hydropower, wind, solar and geothermal energy generation and transmission to the upgrading of housing for energy efficiency purposes.[4]

All projects comply with EIB’s environmental and social standards. EIB’s long standing experience in evaluating and financing sound and sustainable projects is something investors have learned to appreciate.

Market momentum for Green Bonds is now considerable. An important challenge will be to maintain quality and investor confidence.

A useful step forward in this regard is the publication in early 2014 of the Green Bond Principles, best market practice guidelines put together by a group of investment banks in collaboration with other market participants, including the EIB. This has provided a governance platform, supporting quality and integrity.

In the future, the EIB will continue to play a developmental role in the market: “We recognize the strong investor interest in our Climate Awareness Bonds and look forward to further developing the instrument to allow targeted investment in climate related projects,” says Jonathan Taylor, EIB Vice President responsible for Environment and Climate Action.