Cocaine wars to climate crisis: can fortified crops save Colombia? 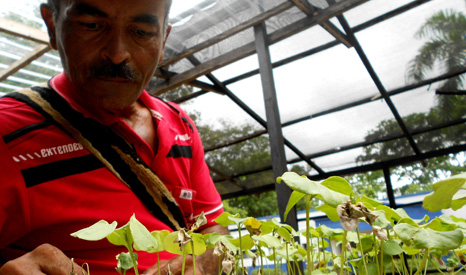 By Fabíola Ortiz in Colombia and Panama

Colombia is infamous as a battleground of the global “war on drugs”. Now, it is climate change, not the cocaine trade, that poses the greatest threat to ordinary Colombians.

The northern province of El Cesar, near the border with Venezuela, is one of the poorest regions in Colombia and was one of the most violent.

Conflict has receded, but changing weather patterns and coal mining are bringing a new set of problems.

Luiz Tiberio Gutierrez, a 53-year-old farmer, tells RTCC that some years ago, “the major problem for people living in rural areas was violence and now the biggest threat is the climate change”.

Gutierrez, or Mr Lucho as he is known in his community, descends from the indigenous Arawak and has grown up his entire life in the region. He grows cocoa, avocado, banana, corn, cassava and bean on his 34 hectare piece of land.

His village of 70 families sits in the huge mountain range of Gran Sierra Nevada de Santa Marta, a nature reserve and world heritage site populated by many criminal gangs and armed militias.

This farmer and his family survived the wave of armed violence promoted by gangs and the Revolutionary Armed Forces of Colombia (FARC). Nowadays life is quiet, said Gutierrez. “There’s no more violence. To be honest what we face now is the climate issue.”

Changing weather conditions are taking their toll on rural communities living in Colombia, especially in El Cesar. Over 40% of the land in El Cesar has turned to desert and the province is suffering a severe food crisis due to lack of rain.

On top of this, the groundwater and river basin are getting contaminated with waste from coal mining. The region has coal reserves of more than 3 million tonnes – one third of Colombia’s total and 60% of its exports.

This toxic combination means El Cesar produces only 10% of the food consumed by its 11 million citizens. Malnutrition and micronutrient deficiency or “hidden hunger” are widespread.

Adriana Tofiño, a researcher from the Colombian Agricultural Research Cooperation (Corpoica), is on the case.

She is working on an approach called biofortification, to enrich staple crops with nutrients such as iron, zinc and vitamin A. As well as being more nutritious, these crops are proving more resilient to climate change and extreme weather.

“At the root of all these problems we are considering growing biofortified beans as an option to recover degraded soil. We want also to mitigate the effects from mining and enhance food security,” said Tofiño.

Corpoica has focused its work on biofortified food on the Caribbean coast, where malnutrition rates are highest, particularly among indigenous communities.

This is reflected in the infant mortality figures. Out of every 10 children born in the area, three die before the age of one. 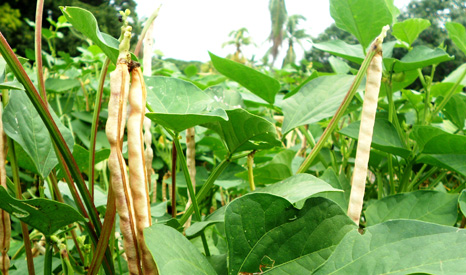 The Caribbean Observatory recognised biofortified beans in 2011 as one of the best ways to achieve food security in the Caribbean region.

This year, the budget in Colombia includes US$420,000 for beans and over US$400,000 to improve scientific knowledge in growing biofortified cassava and potato.

“Weather has changed over the last four years and since 2009 has had a completely shift on the rainfall regime. We don’t know what’s happening. There has also being a tremendous overheating. Since the beginning of this year it has rained very little,” said Gutierrez.

“We’ve noticed this bean is good for consumption and for growing.”

Miguel Lacayo, environmental management expert at the Central American University in Nicaragua, said the farmer’s findings were backed up by results elsewhere.

“In Central America for instance we’re living a huge drought due to El Niño phenomenon,” he said at an international conference on biofortification in Panama last month.

“We look for increasing micronutrients but also enhancing productivity and tolerance to water shortage.”

“When there’s less rain the sources of water are also affected. This impacts on small pieces of land where farmers depend on the rivers nearby. It is not only beans, we can also target other crops like corn, rice and cassava. All of them may be resistant to weather changes.”

Despite its potential to improve health, agriculture and climate, biofortified food in Colombia lacks investment. It only survives thanks to the efforts of teams of scientists that make partnerships with countries like Brazil and Panama, where it has become part of public policy.

And across Latin America, biofortified seeds and techniques reach only 10% of farmers.

But with political will, it could boost food security and climate resilience across the continent, Lacayo said. “We’re still in the initial phase and already saw positive results. It could be implemented as a public policy in Latin American countries like it has been done in Panama. We’re looking for a long term effect.”