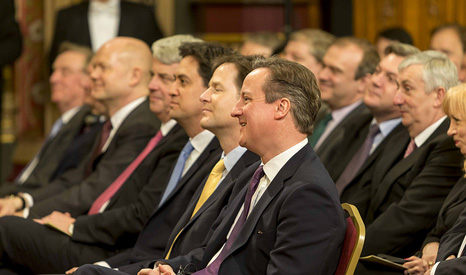 Conservative MPs are more likely to be climate sceptics than their Labour or Liberal Democrat colleagues, a poll of UK parliamentary parties has revealed.

Over half of polled Tory parliamentarians agreed with the statement “it has not yet been conclusively proved that climate change is manmade”.

This number contrasted with 25% for Labour MPs and 33% for Liberal Democrat MPs.

The survey, commissioned by PR Week magazine, sampled 119 of the British parliament’s 650 MPs: 57 from the Tories and 51 from Labour.

Later this month prime minister David Cameron, leader of the Conservative party, will travel to New York to attend a UN summit focused on forging a global consensus on climate change.

The poll revealed the lack of support Cameron enjoys from his backbenchers on the issue, with a further 18% agreeing that “man-made climate change is environmentalist propaganda”.

In a statement Greenpeace UK executive director John Sauven  said the results were a “huge embarrassment” for the prime minister.

“There’s virtually no scientific argument left about whether man-made climate change exists, yet two thirds of Tory MPs are ready to ignore the science in the name of ideology,” he said.

“There’s no reason for the laws of physics to stop at the right of centre of British politics. Climate change is real and is happening – we’re all going to pay a price for our politicians’ failure to take it seriously.”

Some Conservative MPs have long complained about their colleagues lack of understanding on climate matters.

Dr Phillip Lee MP told RTCC that the majority in Parliament “don’t really understand the science, to be blunt”.

In 2012 one of the Conservative party’s leading donors, billionaire banker Sir Michael Hintze, was unmasked as a funder for climate sceptic lobby group the Global Warming Policy Foundation.

But William Hague and Michael Howard, Cameron’s predecessors as Tory leader, have both been strong supporters of climate action.

“Climate change is an issue for all governments, so I welcome David Cameron’s decision to join more than 100 other world leaders at the UN climate summit later this month,” he said.

“The Prime Minister is to be commended for continuing a long tradition of Conservative Party leadership on climate change.”