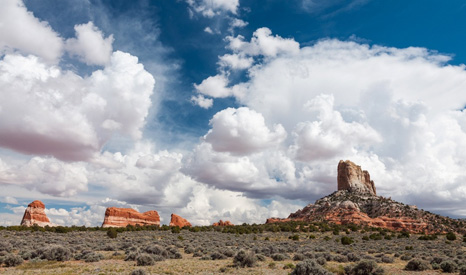 Fiercer tornadoes, more prolonged periods of drought and loss of native fish species are some of the damaging impacts predicted for the US as greenhouse gas emissions continue to rise.

The climate is changing and America’s heartland and southwest are changing with it.

In the southwestern state of Arizona, the streams may be drying up − and that could mean that native fish species will die out.

In the midwest states that citizens call Tornado Alley, the evidence is that there are fewer tornado days per year, but the density and strength of those tornadoes that do form is growing as greenhouse gas emissions continue to rise.

And in the west, which is in the grip of a prolonged drought, things are looking up − but not in a good way.

Relieved of the weight of water they normally bear – the 240 billion tonnes of snow and rain that have not fallen since the drought began – the land is starting to rise, with mountains as much as 15 millimetres higher.

The current drought may not be evidence of climate change – there is a long history of periodic drought in the region – but in general the US southwest is expected to become steadily more arid as planetary temperatures soar.

Kristin Jaeger, assistant professor at Ohio State University’s School of Environment and Natural Resources, reports in the Proceedings of the National Academy of Sciences of the USA that she and colleagues decided to model the surface flow of the Verde River Basin in Arizona by 2050.

Fish that live in these waters are already threatened or endangered, their survival depending on being able to move around the watershed to eat, to spawn and to raise offspring.

What this will do is sever connections between streams, and the deeper pools will become isolated. Native species, such as the speckled dace, the roundtail chub and the Sonora sucker, will increasingly have nowhere to go.

Dr Jaeger calls the estimates conservative. She and her fellow researchers did not take account of the groundwater that will be removed to support the expected 50% increase in human population in Arizona by 2050.

But scientists have begun to detect a pattern of change. In 1971, there were only 187 days with tornadoes, and in 2013, there were only 79 days, according to James Eisner, a geographer at Florida State University, and colleagues in a report in the journal Climate Dynamics.

But the tornadoes that do form are distinguished by what the scientists call “increasing efficiency”. They are more severe, and there are more of them on a given day.

“We may be less threatened by tornadoes on a day-to-day basis, but when they do come, they come like there’s no tomorrow,” said Professor Eisner.

Meanwhile, Adrian Borsa  and other researchers at Scripps Institution of Oceanography in San Diego report in the journal Science that they have been looking at data from GPS satellite ground stations, to discover that – thanks to the current drought – all of them are on the move.

Overall, the surface of the arid west has gained 4mm in altitude since the drought began, and the highest uplift, 15mm, has been measured in the mountains.

They put it down to the water that has not fallen and which would normally have covered the mountains as heavy snow. Altogether, the water deficit is 240 gigatonnes, or 62 trillion gallons − the equivalent of a 10cm layer of water across the entire west of the US.

This is roughly the equivalent of the mass of ice lost each year from the Greenland ice sheet.

The crustal movement is not expected to have any impact on the likelihood of earthquakes in, for example, California, but the study could offer researchers a new way of measuring fresh water resources over very large regions.

It could be a case of don’t worry about all those rainfall gauges, just watch how the earth moves. Or, in the researchers technical language, such observations “have the potential to expand dramatically the capabilities of the current hydrological observing network”.