Hillary Clinton: US can be clean energy superpower 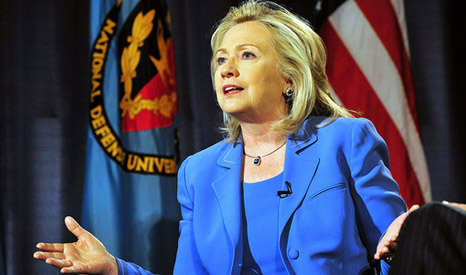 Hillary Clinton: “America’s ability to lead the world on climate and energy hinges on our commitment to act ourselves” (Source: flickr/US State Dept)

The US can be “the clean energy superpower the world needs”, Hillary Clinton told green business leaders on Thursday.

Clinton, who is widely expected to run for presidency in 2016, said climate change posed “the most consequential, urgent, sweeping collection of challenges we face as a nation and a world”.

On carbon dioxide emissions and rising temperatures, she said: “The data is unforgiving, no matter what the deniers try to assert.

“The threat is real. But so is the opportunity.”

Nevada has quintupled its renewable energy capacity since 2008, investing more than US$5.5 billion, she said.

Tesla claims its new factory will bring US$100 billion worth of benefits to the state by 2020, while producing enough batteries for 500,000 electric cars a year.

Highlighting the skilled jobs created in clean energy sectors, Clinton hit out at those who present a “false choice” between protecting the environment and economic growth. “We can do both.”

In an appeal to nationalist impulses, she said: “China and other competitors are racing ahead with big bets on renewables. We cannot afford to cede leadership in this area.”

She added: “If we come together to make the hard choices, the smart investment in infrastructure, technology and environmental protection, America can be the clean energy superpower for the 21st century.”

In a more controversial message for environmentalists, she lent her support to shale gas to provide a “safe bridge” to a clean energy future.

However, campaigners have raised concerns about the “fracking” techniques used to extract shale gas.

Clinton acknowledged these concerns, saying the risk of methane leaking from wells and pipelines was “particularly troubling”.

But she said with “smart regulations” and technology, these problems could be tackled.

Globally, negotiators are preparing to strike a deal to act on climate change in Paris next year.

All eyes are on China and the US, as the two highest emitting countries, to show leadership.

“America’s ability to lead the world on climate and energy hinges on our commitment to act ourselves,” said Clinton.

“No other country will fall in line just because we tell them to.”

He and Clinton have experienced the difficulty of international climate negotiations first hand, at the 2009 Copenhagen summit.

According to Clinton, the pair had to gatecrash a “secret” meeting of emerging economy leaders to get them onside.

The leaders of China, India, Brazil and South Africa were seeking to dilute the deal the US was seeking, she claimed.

While Copenhagen was widely seen as a flop, Clinton said the discussions at that meeting “did provide a foundation to build on”.

Now, she is “cautiously hopeful” the Chinese are coming round to the idea of climate action.