Britain must cater for wildlife moving northwards because of climate change, says veteran naturalist and broadcaster 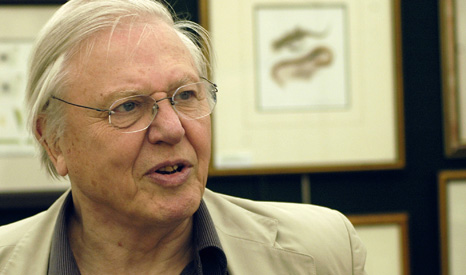 Britain must embrace foreign animals and plants migrating northwards due to climate change, Sir David Attenborough said at a conference on Wednesday.

The veteran naturalist and broadcaster said those concerned about protecting the natural environment must look forward, not backward.

Whether climate change is man-made is “yesterday’s argument”, Sir David said. “It is happening. Today’s argument is how we deal with it.”

He was addressing conservationists, business and political leaders at the invitation-only Conference for Nature in London, hosted by birdlife charity RSPB.

The meeting followed a stock-take of Britain’s wildlife compiled by 25 charities. Of more than 3,000 native species studied, 60% had declined in recent decades. Climate change was seen to have an increasing impact.

The shift in weather conditions is prompting a number of plant and animal species to move northwards, into cooler regions.

As a TV presenter, Sir David brought nature documentaries to a mainstream audience for decades.

He was largely silent on climate change until 2006, when he made two programmes on the subject.

Explaining his position, he said he had been “cautious of crying wolf” and waited until “the proof was conclusive”.

Giving the keynote speech on Wednesday, Sir David acknowledged the role of climate change in shifting the distribution of wildlife.

“We know that climate change is happening; there can be no doubt about that,” he said.

“It is of course to be regretted from some points of view but it is also to be embraced.”

That meant allowing for climate immigrants from continental Europe, such as butterflies and moths.

“Instead of thinking every new arrival is an exotic foreigner that ought to be repelled, we should recognise and cater for them.”

Nature reserves are “by no means enough”, Sir David argued: the whole countryside and urban environment should be made available to wildlife.

#naturesintrouble “children develop something extraordinary for their souls when engaging with nature” pic.twitter.com/LZ6ML79FOB

Sir David urged delegates not to take a “backward attitude”. The global population has trebled in the past 50 years, he noted, and conservationists could not bring back a “paradisiacal inter-war landscape”.

“We certainly aren’t proposing we go back to a kind of pristine Britain, when there were forests and mountains and seashores that were unsullied by man.

“No part of the British countryside, apart from perhaps a few square metres at the summits of the Cairngorm mountains, has been unaffected by human activity.”

And he said protecting the environment could “on occasion make things more expensive”.

But he said humans depend on the natural world “for their very sanity”, concluding: “Those problems have to be grappled with. If they are not, there will certainly be great impoverishment: physically, spiritually and emotionally.”