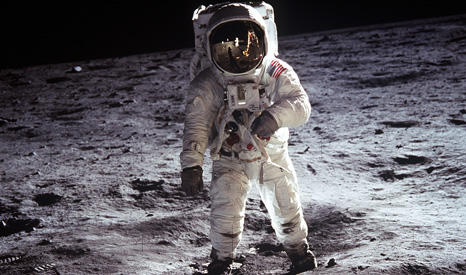 Green Climate Fund aims to raise as much as cost of the Apollo moon mission
(Pic: Wikimedia commons/Aldrin Apollo 11)

There are prospects of significant progress in the response of world governments to climate change, according to a former UK government chief scientist, Sir David King.

“There are signs that a leadership role is beginning to emerge”, he told a conference in London held by the Green Economy Coalition.

Sir David also announced that he and a colleague are working with governments to raise funds to help all countries, including developing countries,  to switch to renewable energy. Their scheme hopes to raise nearly as much as the cost of the Apollo programme, NASA’s moon-landing project.

“President Obama is getting ready to commit the US to action, and last week the Chinese prime minister, Li Keqiang, announced that his country’s emissions had fallen by 5% in a year,” he said.

“The US and China are positioning themselves for an agreement. And that’s not all. The first speech by the new leader of India, Narendra Modi, spoke of his determination ‘to solarise’ the economy.

“Brazil’s emissions, including from deforestation, have fallen from 16.5 tonnes per person to 6.5 tonnes since 2005. Across the Andes in Peru, where the UN climate convention negotiations will take place in December, they know well enough about climate change.

“From Lima they can see the ice retreating up the mountains. At its lowest point it is now 1,000 metres above where it reached to 30 years ago..”

Sir David praised the UK’s commitment to cut greenhouse emissions by 80% by 2050, compared with their 1990 levels. He said the target – matched by Mexico – was likely to be met. The biggest climate challenge confronting the UK, he said, was from rising sea levels.

Some critics say, despite this, that the UK government is dragging its feet, especially on supporting renewable energy. With a colleague, the economist Professor Lord Richard Layard, Sir David is working on a scheme to raise money to address this.

“It’s called the Global Apollo Programme”, he explained. “We are urging all governments to form a commission to spend 0.02% of their GDP, which should raise US$10-20 billion/yr over 10 years,  to fund RD&D for low-carbon technology.

“We are encouraging governments to launch the programme at the UN during Ban Ki-moon’s climate summit on 23 September. The objective is that by 2020 renewable power should be cheaper than coal in all sunny parts of the world, and by 2025 in all parts of the world.”

Sir David, who for seven years was the UK government’s chief scientist, is now its foreign secretary’s special representative for climate change. Asked if he were hopeful about progress to tackle climate change, he replied: “I’m in this job because I’m an optimist.”