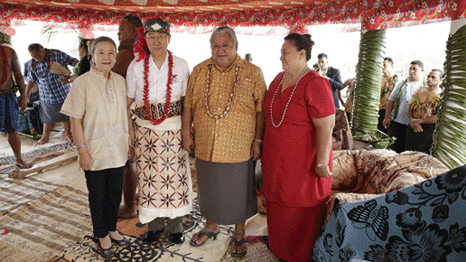 Ban Ki-moon was given the title of ‘Tupua’ or ‘chief’ during a traditional ceremony in Saleapaga, Samoa, ahead of the UN small islands conference (Pic: UN Photo/E. Schneider)

Over 3,000 people have gathered in Samoa for a once-in-a-decade discussion on the future of the small island states.

Climate change is set to dominate talks between delegates, led by the presidents and prime ministers of almost all the islands. For these tiny countries, rising sea levels caused by warming temperatures poses an existential threat.

“It is time that we recognise climate change for what it is: a collective crime against humanity,” said President James Michael of the Seychelles.

“Climate change is robbing island nations of their right to exist. We must save our future together.”

Speaking at the event, UN Secretary General Ban Ki-moon said small islands were a “magnifying glass” exposing vulnerabilities countries across the world are likely to face in the future.

“The plight of small island developing states highlights the moral case for climate action,” he said.

“By failing to act, we condemn the most vulnerable to unacceptable disruption to their lives.”

In an interview published in the Sydney Morning Herald the World Bank’s climate envoy Rachel Kyte said rich nations had an “obligation” to help island communities adapt to changing conditions.

The UN’s science panel recently warned that around 15% of Pacific islands could be wiped off the map by 1m of sea level rise. Oceans are rising four times faster than the global average around the islands.

RMI President says “all we can achieve here in Samoa will be moot if we don’t address the greatest threat: climate change”. #SIDS2014

Talks, which continue until Thursday, will focus on building partnerships that will bring ideas for a more sustainable lifestyle on the islands into fruition.

Almost 300 partnerships have already been formed, including a Google-backed scheme to use Google Earth and mapping technology in ocean protection.

The Conference will culminate in “Samoa Pathway” – a blueprint to guide sustainable development in the islands.

The first draft, issued before the meeting, called for financial support for the small island states, as well as supporting new renewable energy and disaster risk reduction initiatives.

Small island leaders met for the first time in Barbados twenty years ago. The Samoa meeting is the first small islands conference since 2005, when representatives met in Mauritius.

But the islands had limited success in implementing the outcomes of these meetings.

Despite the ambition of the small island states in combating climate change, their capacity to do so is limited without the financial backing of richer countries. So far, this support has not been forthcoming.

Ban said that UN agency chiefs would work together to ensure that this year’s plan would be better implemented that before. The UN heads of climate, development and disasters were all present at the conference.

The gathering is a crucial waypoint before the UN Secretary General hosts his climate summit in New York on 23 September.

RTCC understands that leaders will draw up their contribution to the summit during the meeting.

“You can tell the largest emitters what action you expect from them. You can show how you are working to build resilience and create the green economies of the future. You can set an example for the world.”