Nauru ambassador: moral voice of island states must be heard 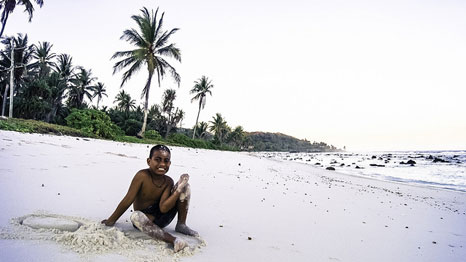 Global attitudes towards small island nations must be overhauled if the UN’s climate summit is to come to a credible conclusion, according to Nauru’s UN ambassador Marlene Moses.

Moses, who represents the alliance of small island states (AOSIS) in New York, said they are often ignored by the world’s big emitters.

This blind spot extends to the UN itself, she said, despite its attempt to concentrate attention on the islands by styling 2014 as the International Year of Small Island Developing States (SIDS).

“There needs to be a paradigm shift in terms of how the global community and international institutions, including the United Nations, focus on the SIDS priority. At the moment we feel the international community has not accorded it the appropriate attention,” said Moses, in an interview with RTCC.

She said that the countries, which are among the most vulnerable in the world to the impacts of climate change, are “stuck in a trap” of being “overpromised but under-delivered”.

The low lying islands could become uninhabitable due to climate change. The UN’s science panel recently warned that 15% of Pacific islands could be wiped out by 1m of sea level rise. Their bleak future has already prompted residents to ask for asylum in New Zealand.

But the spectre of mass migration is unlikely to spur action at an international scale, said Moses, who said that raising the relocation issue at the UN climate talks was unlikely to help their cause.

“Already the signs are there that climate change is an existential threat. If they are disregarding that now, I wonder whether using this as a tactic will draw international attention. It will be a bit of sensationalism, but in the long term I really do wonder whether it can be used as a tactic,” she said.

In September, a once-in-a-decade conference of the small island nations will take place in Samoa, offering a rare opportunity to collectively address climate change and sustainability.

The conference will be attended by heads of state and UN agencies, including UN development chief Helen Clark and former Ireland president Mary Robinson. Moses says it will be an opportunity to seek new partnerships and raise the profile of the SIDS within the international community.

It will precede a landmark UN climate summit to be hosted by Secretary General Ban Ki-moon in New York on 23 September, where leaders have been invited to declare “bold” new actions on climate change. AOSIS will decide its contribution to this summit during the Samoa conference.

“We now call on the international community who have stated their promises to help us to be disciplined enough to keep their word,” said Moses.

“Without the voice of the SIDS you won’t have a credible climate regime in Paris. Without our opinion and our priorities, the post-2015 development goals will not be universal. The UN secretary general’s climate summit will not be credible without the moral voice of the most vulnerable group.”