NASA finds a banned ozone-depleting gas is still being emitted, in a blot on the Montreal Protocol’s record 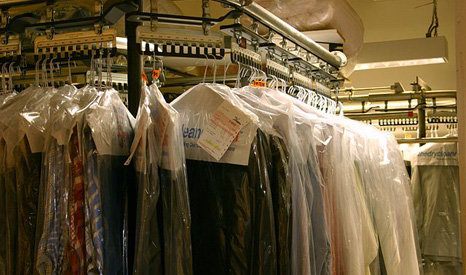 Carbon tetrachloride was used for dry cleaning before it was banned
(Pic: Wikimedia Commons/Simon Law)

Efforts to protect the ozone layer are often cited as an environmental and diplomatic success story.

There are moves to build on that success and use the treaty to phase out HFCs, a group of potent global warming gases.

Now NASA scientists say one of these banned chemicals is still being emitted, in a blot on the treaty’s record.

The latest research found “an unexpectedly large amount” of carbon tetrachloride (CCl4), a chemical once used in dry cleaning and fire extinguishers, in the atmosphere.

Some 39 kilotons of the banned substance is being emitted every year, roughly 30% of peak emissions before the Montreal Protocol came into effect.

“We are not supposed to be seeing this at all,” said Qing Liang, atmospheric scientist and lead author of the study.

“It is now apparent there are either unidentified industrial leakages, large emissions from contaminated sites, or unknown CCl4 sources.”

No CCl4 emissions were reported between 2007 and 2012. Due to natural processes, levels of the chemical were expected to decline by 4% a year. Instead, measurements from the ground showed a decline of just 1% a year.

Earlier NASA research found CCl4 stayed in the atmosphere 40% longer than previously thought, but this did not explain the whole gap.

“People believe the emissions of ozone-depleting substances have stopped because of the Montreal Protocol,” said Paul Newman, chief scientist for atmospheres at NASA’s Goddard Space Flight Center and co-author of the study.

“Unfortunately, there is still a major source of CCl4 out in the world.”

Megumi Seki, senior scientific officer at the UN’s ozone secretariat, said the research was carried out as part of the assessment process for the Montreal Protocol. It should be seen as a success of the treaty that this had led to better understanding, she insisted, not a failure.

The difference between observed levels of CCl4 and reported emissions has been under investigation since the early 2000s. Emissions from landfill and possibly from feedstock uses not controlled by the Montreal Protocol were found to account for some of this.

“The information has not been sufficient to close the gap completely,” said Seki. “Thus research continues.”

Parties to the treaty will consider proposals to reduce releases in November, at their next conference.

Research from the University of East Anglia earlier this year identified four new ozone-depleting gases in the atmosphere.

The levels measured were much lower than peak CFC emissions in the 1980s of around a million tonnes a year.

However, lead researcher Johannes Laube said the results were “worrying” because it is not known where the emissions came from.