Into the Dragon’s Den: climate innovation gets competitive

Green start-ups can win big money in the EU-backed Climate-KIC competition. But are the judges after style or substance? 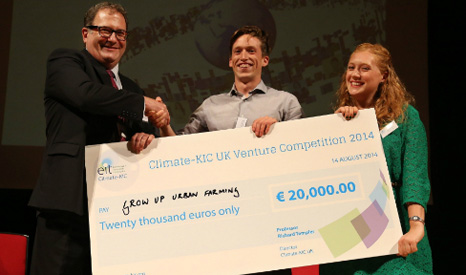 Climate change can seem like an intractable problem. The solutions we know about are expensive and involve a lot of hard work. Wouldn’t it be great if we could find fun new solutions that make it easier?

The EU is doing its bit to attract the finest minds to that quest, with an innovation programme called Climate-KIC. It has an accelerator scheme for green start-ups, that includes the chance to compete for cash to get things going.

RTCC went along to see one of these competitions in action – a regional heat in London.

A string quartet is playing as guests arrive at the Britten Theatre at the Royal College of Music, but this is not a recital.

It is the warm-up act to a different kind of performance: seven men and two women are about to pitch their innovative solutions to climate change.

Two winners of this Climate-KIC competition will get €20,000 each towards their projects and go on to the European final in Valencia. Not to mention the warm fuzzy feeling that comes with making a difference.

Each hopeful has five minutes to make their pitch and five more to answer questions from the four judges, who are drawn from government, academia, finance and industry.

In another nod to the musical setting, the timekeeper is a student with a gong, introduced as a “business percussionist”. (“Are you available for board meetings?” quips the presenter.)

As with any innovation competition, there are the inevitable comparisons with TV programme Dragon’s Den.

Like Dragon’s Den, there is a wide range of ideas, from the down-to-earth to the downright wacky. There are snappy presentations and a certain amount of nervous stumbling over words.

The judge from Shell, John MacArthur, casts himself in the role of fellow Scot and Dragon’s Den star Duncan Bannatyne.

(Somewhat confusingly, at another point he likens himself to Craig Revel-Horwood from Strictly Come Dancing. If this is a ballroom dance show, it’s disappointingly short on glitter and fake tan. And waltzing.)

Unlike in Dragon’s Den, the no-hopers have already been weeded out.

These contestants have all passed the first hurdle and got on Climate-KIC’s acceleration programme, which aims to get start-ups to the stage they can attract investment.

They have already convinced the hard-headed executives of the EU’s flagship climate innovation programme their project has serious climate-saving potential.

So the pitches begin. A grey-haired contestant plugs aggregates made from waste; a young woman makes an earnest case for intelligent heating controls to help social housing tenants; a charismatic blond in blue suede shoes makes an engaging sales pitch for “unprinters”.

The most ambitious proposal in carbon terms would have to be CHESS.

This audacious outfit claimed to be able to generate carbon-negative electricity from natural gas and limestone.

Using three chemical reactions that are already used in separate applications, the start-up claimed it could suck carbon dioxide out of the atmosphere.

“We are very confident this will work,” said project leader Tim Kruger. “It is based on three reactions that have already been shown to work. We have modelled it comprehensively.”

They calculate the process will remove 600g of carbon dioxide from the air for each kWh generated.

For comparison, the IPCC calculates a standard combined cycle gas turbine has lifecycle emissions of 410-650g/kWh. Coal power is responsible for emissions of 740-910g/kWh.

Kruger used to work for the Carbon Trust but was “disappointed” by the solutions proposed for climate change, he said. “They were all about slowing things [carbon emissions] down. We need to hit reverse.”

While it is early days, Kruger reckons the technology will be able to compete on cost with conventional power generation.

It sounds too good to be true. Perhaps the judges thought so, because they didn’t win.

Or perhaps they weren’t sharply dressed enough. The prizes went to the slick performer in the blue suede shoes and an impeccably confident young woman in a green dress.

The first of those belonged to Reduse, a company marketing a device – the “unprinter” – that uses lasers to blast printing ink off paper so it can be reused.

His product’s success is made possible by the utter failure of the 1975 “paperless office” concept. Today, the average Brit uses 10,000 sheets of paper per year, of which 40% are thrown away the same day.

Reusing paper instead of recycling could cut emissions by an estimated 80%, they say.

The second winner was GrowUp, an urban farm that produces fish, salad and herbs in the heart of London.

Waste from the fish tanks fertilises the plants, which also benefit from the “heat island” effect of the concrete jungle. Produce can be delivered to urban customers within six hours of harvest.

Oh, and they plan to employ disadvantaged youth. The climate benefits of this model are not spelled out. But who needs to count carbon emissions when you’re inspiring inner city kids?

So there you have it: a product solving a problem that shouldn’t still exist and a novel concept with unspecified carbon savings. Well, every little helps.

It seems with protecting the climate as with any other business, it’s all about marketing.