Warming records fall as July comes in as fourth hottest 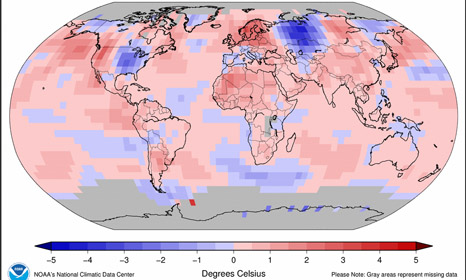 Monthly temperatures in 2014 continue to sizzle, with July coming in as the fourth hottest on record.

May and June this year set heat records, with some scientists predicting the warmest year on record.

There is a developing El Nino event, which is associated with high temperatures, droughts and flooding.

That doesn’t mean it won’t have a strong impact, he added. “Every El Nino is a unique event, with slightly different characteristics”

Combined land and ocean average surface temperatures from January to July 2014 have now tied with 2002 as the third warmest period since records began.

NOAA’s monthly report said ocean temperatures were “much warmer than average” in every ocean basin.

This was “notable across parts of the Arctic Seas between Greenland and northern Europe, the southern Indian Ocean, and the western equatorial Pacific Ocean.”

Norwegians experienced their warmest July since 1990, while in the UK it tied with 1933 as the eighth warmest in the books. Three US states witnessed their coolest July in 120 years.