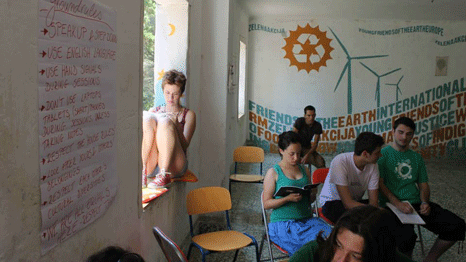 In May 2014, almost two decades after the close of the Bosnian war, a mine exploded near the northern village of Cerik.

One of the 9,000 landmines left over from the 1992-95 conflict had been dislodged by floods, setting off a blast in which nobody was hurt.

The floods themselves were less benign. In early 2014, torrents tore through Bosnia and Serbia, bringing landslides and the death of around 80 people. Authorities say the damage will cost more to clean up than the three years of conflict in the Balkans.

Since then, recovery efforts have been hampered by more flooding caused by heavy rainfall.

Yet residents of the Balkans are still reluctant to talk about climate change, despite evidence that warmer temperatures could have been behind the record-breaking destruction, and may bring worse impacts in the future.

Three years of war in what was once a middle-income country in Yugoslovia have left their mark. As well as killing thousands of people, it cost around US $100billion and displaced around half the country’s 4.4 million pre-war population, plunging the nation into poverty. Youth unemployment is currently around 50%. 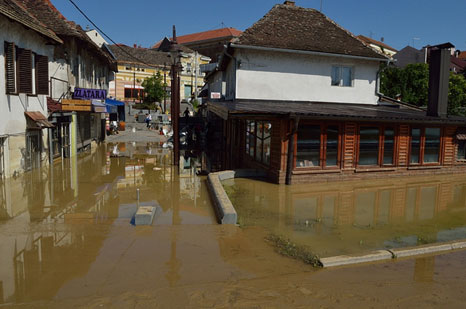 Flooding in May in Bosnia and Serbia killed around 80 people (Pic: Ian Bancroft/Flickr)

“It is hard to fight against climate change in a developing country like Bosnia, and it is hard to explain to people we don’t need the factories that are polluting the air and changing the temperature, because everyone wants more work,” says Maja Bradaric, a 22-year old climate activist from Bosnia, whose family home was destroyed in the floods.

Other countries across the Balkan region, including Croatia, Serbia, and Kosovo, face similar problems, where environmental concerns are drowned out in a tide of poverty, post-conflict recovery and the psychological thumbprint of Communism.

The lucrative layers of coal and other minerals sitting beneath the countries add another incentive for Balkan citizens to close their eyes to the problem, even if they can’t shut their lungs to the plumes of smoke and soot they bring with them.

For instance, in Kosovo, home to 1.8 million people and two power plants (with a third on its way), air pollution is estimated to cause 835 premature deaths every year.

In the wake of the floods, in a whitewashed house on the Croatian island of Šolta, around 50 young people from the Balkans assembled in July for a six day gathering on climate change in their region.

This meeting of the Balkan Youth Climate Movement was organised by Maruška Mileta, a 24-year-old Croatian who think young people should be at the vanguard of the fight against climate change in the Balkans.

It is the first time that a regional event on climate change has taken place in the region, where global warming remains off the radar for civil society groups – even environmental ones. 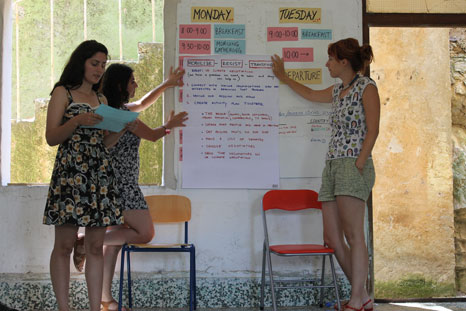 Across the region, the challenge is still to convert the dialogue to “Is climate change happening?” to “Let’s do something about it,” explains Mileta.

“But it’s hard because we are faced with many social and political issues,” she says, citing not only unemployment and the deep financial crisis, but also homophobia, nationalism, corruption and the influence of the Catholic Church.

“I thought that we needed to do something regionally, create a regional youth climate platform, as nationally in Balkans it wouldn’t really work,” continues Mileta.

High levels of poverty make it challenging for countries to face the problem individually, yet the region’s fractious history means it has been difficult to establish cross-border cooperation.

If the Balkans wants its own grassroots climate movement, it will be up to youth to lead the way. The under-30s are the first generation to have matured free from both the influence of divisive nationalism and the repression of Communist dictatorships.

Under Communism, which was established across Yugoslavia in 1946 following World War II, older generations fell out of the habit of rebellion, says Mileta.

During the old Communist regime, environmental organisations were a foreign concept, explains Nataša Crnkovic, a 26-year-old activist from Bosnia – and those harbouring anti-government sentiments simply did not exist.

“There were some, but more like mountaineering clubs or scouts – not something like what is present now. They were for nature lovers, not for people complaining about something.”

Following the Dayton Agreement in 1995, which brought peace to Bosnia, Serbia and Croatia, international donations came flooding into the region, aiming to rebuild the lives and the economy of the countries brutalised by three years of war.

Some of these funds went to civil society groups, which allowed a trickle of environmental organisations to well up within the countries. 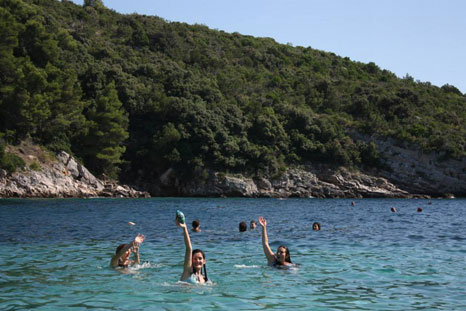 Members of the Balkan Youth Climate Movement play in the sea around the Croatian island of Šolta (Pic: Balkan Climate Youth Movement)

Initially, these avoided tackling climate change directly – an issue that could compromise efforts to quickly rebuild the economy and get people back in work.

But it is only recently that young people, free from the lingering impressions of Communism and able to take advantage of advancing liberties, have started to make the connection.

“I don’t feel isolated because I have travelled, I have seen,” says Festë Isufi, a 19-year-old student from Kosovo, currently studying in Finland.

“In general, my generation are isolated because we have visa restrictions. Going to embassies and spending a couple of hours there is not something everyone is volunteering to do. But as an individual I have been very free to see places and listen to lectures about climate change everywhere.”

She adds that the new push towards regional youth collaboration could make a new beginning in another way: “I know in Balkans we have had a lot of history with wars. But our generation, we can get along with each other. We have moved forward and this is how we can do it.”

Mileta believes that the Balkan Climate Youth Movement is just the beginning. She hopes to lead the group to the UN’s climate conference in Paris 2015, raising the profile of the usually silent region.

But she, and other youth in the region, are working against the clock. The Balkans currently face another turning point: whether they lock into a future of dirty energy, or decide to harness their potential for clean, renewable energy.

“Basically, all the dirty projects are being dumped in this region,” said Mileta, highlighting the case of Kosovo C – a proposed 600 megawatt coal power plant.

It’s currently the only coal project to receive the backing of the World Bank following its decision to stop financing barring certain “exceptional circumstances”, which World Bank President Jim Yong Kim deems Kosovo C to be.

Meanwhile, Croatia plans to open the Adriatic Sea to further offshore oil and gas drilling, while Chevron has started fracking operations in Romania.

All the while, as Kosovo’s air pollution and the recent flooding shows, the impacts of these projects and of climate change generally are beginning to take their toll.

It is up to youth to dispel the lethargy of the past, said Bradaric. She hopes that the floods which destroyed her house could one day prove a tool in this mission, but it will have to be broached carefully.

“We think it’s still a bit fresh for us we walk in and talk about climate change while people are still fighting for their homes. It’s hard for people to talk about it.”

But she adds: “Maybe it’s just because we haven’t tried.

“Maybe I will be surprised with the reaction of people. Maybe they will be prepared to change.”