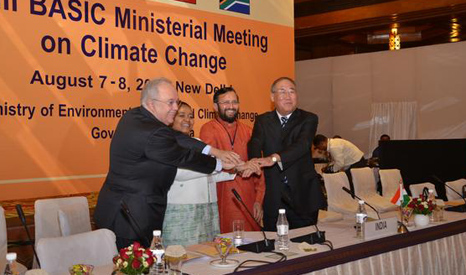 By Neeta Lal in New Delhi

Brazil, South Africa, India and China (BASIC) projected a united front of some of the world’s four largest developing economies for the next round of climate talks at Lima, Peru, scheduled for the year end.

The group’s representatives, who met in New Delhi for the first time since the UN-sponsored climate change negotiations in Warsaw last November, were hosted by Indian environment minister Prakash Javadekar.

Discussions focused on strategies and tactics to bolster the multilateral negotiation process for a new climate deal.

The new deal – which will replace the existing Kyoto Protocol after 2020 – aims to give more leeway to the developing nations to prioritize eradication of poverty and development issues while putting more responsibility on the developed world to tackle climate change in view of their historical responsibility towards it.

The BASIC quartet also appeared to have hardened its stance vis a vis the developed world. It urged the latter to “significantly” enhance and introduce “transparency” in their mitigation action so that the new agreement is equitable.

Discussions on the new climate change agreement, which will be firmed up in Paris next year, are already underway. It is expected that the broad contours of a working draft will be agreed upon at Lima under the aegis of the UN’s climate body.

If the wealthy nations were looking for succor in the form of the BASIC group announcing legally-binding greenhouse gas commitments to control emissions by 2020, they were in for a disappointment.

On the contrary, in a bid to underscore the industrialized world’s heightened responsibility towards climate change, Javadekar stressed that “developed countries must walk the talk” and improve their emission reduction commitments.

BASIC representatives drove home the point that the developing countries have already invested much more time and energy than the developed countries to mitigate climate change.

They said the onus was now on those historically responsible for most of the carbon emissions to date to fulfill their end of the commitment by providing funds, technology and capacity building support.

Disenchantment over the “continued lack of any clear roadmap for providing US$100 billion per year by developed countries by 2020” was also expressed.

This commitment was made by then US Secretary of State Hillary Clinton at the 2009 Copenhagen climate summit. The money is to be directed to the Green Climate Fund (GCF) which will provide long-term finance to developing countries in their war against greenhouse gas emissions.

Though the fund is in place, there’s ambiguity still over how this money will be raised. During the UN Climate Change Conference 2013, held in Warsaw, this issue had splintered the members, resulting in a walk out by the Indian delegation along with reps from more than 100 developing countries.

Though India has now said it will not play spoiler at Lima, it has also made it clear that it will expect the developed nations to fulfill their share of commitment to check carbon emissions.

To push the agenda of equitable responsibility in tackling climate change, India has also been holding bilateral talks with the US. Javadekar met with American climate negotiator Todd Stern who was in New Delhi recently as part of a delegation led by Secretary of State John Kerry.

“Though India has long been advocating that developing nations owe it foremost to their people to eradicate poverty, developed economies like the US, Russia, Japan, Canada, Australia and Europe are far from enthusiastic about binding commitments unless emerging economies also do the same,” explains a senior official part of Javadekar’s BASIC team.

This issue, the official added, remains a contentious one and might even scupper future climate deal negotiations.

While climate negotiators from various governments are now preparing for the next summit in Lima, it is will only be a warm-up to the biggie to be held in Paris in December 2015 where a proposed global agreement on mitigation will require all countries to make a firm commitment for the post-2020 period.

All eyes are now on India, long a vigorous advocate of the equity principle which requires industrialized nations to put in more effort and money into tackling climate change issues.

The overarching narrative at Lima – as well as Paris – will finally determine the contours of the highly anticipated climate deal.