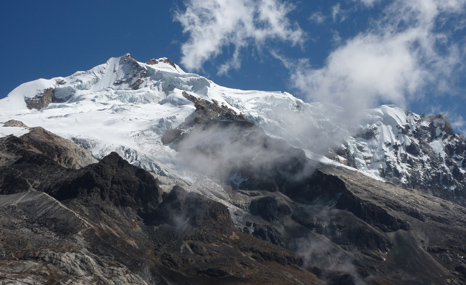 Huayna Potosa­, Bolivia, is home to one of the fastest melting glaciers in the world

Human activity is playing an increasing role in the melting of glaciers, Austrian and Canadian scientists have found.

One of the most disruptive effects of climate change, glacier retreat leads to rising sea levels, landslides and unpredictable availability of water downstream.

Meanwhile, a separate study found ice discharge from the Antarctica could raise sea levels by up to 37cm this century, more than previously thought.

Scientists and policymakers are calling for international collaboration to protect the Antarctica for research and tourism.

Globally, glaciers have been in retreat since the middle of the 19th century, due to a combination of natural and man-made causes.

A study published in the journal Science has found between 1851 and 2010, humans were responsible for only around a quarter of the global loss of glacier mass.

The rest can be put down to natural factors such as variable radiation from the sun and volcanic activity.

In the last 20 years of that period, the human contribution increased to 69%. This is the result of greenhouse gas emissions pushing up global temperatures.

“Typically, it takes glaciers decades or centuries to adjust to climate changes,” says study co-author Ben Marzeion, a climate researcher at the University of Innsbruck.

As people continue to pump greenhouse gases into the air from burning fossil fuels, this trend is set to continue, Marzeion said.

“Without anthropogenic forcing, the glaciers would stabilise at slightly higher elevations, and eventually stop losing mass.

“Human interference with the forcing of the climate system is preventing glaciers from reaching such a new equilibrium anytime soon.”

The researchers used computer simulations of the climate to model glacier evolution and checked their results against real world observations.

They studied all glaciers outside Antarctica, using data from the Randolph Glacier Inventory.

The Antarctic ice shelf is also losing mass. The latest results from the Potsdam Institute for Climate Impact Research, in the Netherlands, show this could be happening faster than previously thought.

Ice lost from the continent surrounding the South Pole is responsible for less than 10% of sea level rise at present. This is set to escalate, the researchers warned.

If greenhouse gas emissions continue to rise at their current rate, they projected ice lost from the Antarctica could push sea levels up by 1 to 37cm.

“This is a big range – which is exactly why we call it a risk,” said lead author Anders Levermann. “Science needs to be clear about the uncertainty, so that decision makers at the coast and in coastal megacities like Shanghai or New York can consider the potential implications in their planning processes.”

International negotiators hope to cut emissions and limit global temperature rise to 2C above pre-industrial levels. They are set to sign a climate treaty in Paris next year.

Even if they succeed in that goal, Antarctic melt could raise sea levels by up to 23cm, the researchers say.

It is uncertain how fast Antarctic ice loss will raise sea levels, but the consequences could be severe (Pic: edubucher)

The latest report from the Intergovernmental Panel on Climate Change (IPCC), which collates the results of hundreds of studies, estimates sea levels will rise between 26 and 82cm this century. The Antarctic accounts for 5cm of that.

Those numbers were markedly higher than in the IPCC’s 2007 assessment, as new satellite and field data came to light. The Potsdam study suggests the picture could be even more serious.

Hundreds of millions of people live in low lying coastal regions, which are threatened by rising seas.

Robert Bindschadler from NASA, co-author of the Antarctic study, said: “Billions of dollars, euros, yuan etc. are at stake and wise and cost-effective decision makers require this type of useful information from the scientific experts.”

As with glaciers, there can be a delay of several decades between rising temperatures and their impact on Antarctic ice.

“But pulling together all the evidence it seems that Antarctica could become the dominant cause of sea level rise much sooner.”

While the study is a step forward in understanding Antarctica, the researchers said there is room to improve data and modelling of the physical interactions between ice and ocean.

In an article published in the journal Nature last week, 75 scientists and policymakers from 22 countries set out their priorities for Antarctic research.

Lead author Steven Chown, a professor at Monash University, said: “In order to address these scientific areas, researchers and governments must work together, and we must have greater international collaboration.

“There also needs to be enhanced investment in science in the region, better environmental stewardship, and more communication around the significance of the region to the public.”

Australia is developing a 20-year strategic plan for Antarctica.

Chown urged Australia to reverse a decline in its scientific presence in the region. The country is backing 62 projects this year, down from 142 in 1997/98.

“Australia has a clear interest in Antarctica and it also has the capability to show leadership globally in the science, environment and policy arenas,” said Chown.

“An opportunity exists now to grow that leadership to the benefit of Australians and to society globally.”