Evidence of shifting weather patterns has failed to stir the government into preparing for disaster management, say experts 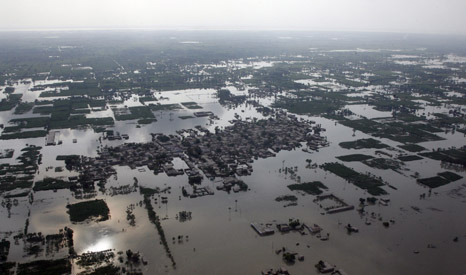 Heavy flooding caused by monsoon rains in Punjab Province, near the city of Multan, Pakistan, in 2010 (Pic: UN Photos)

Scientists and opposition politicians in Pakistan have strongly criticised the government for what they say is its neglectful attitude towards coping with the challenges posed by climate change.

“The government’s insufficient response to shifting weather patterns continues to cost the national economy dearly and is depriving people of their livelihoods, particularly in the agricultural sector,” Malik Amin Aslam Khan, a former state minister for environment, told a climate change seminar in Islamabad.

Local institutions are ill-prepared in disaster management, said Amin Aslam , and there is an urgent need for more co-ordination with various international bodies in order to cope with climate extremes.

The seminar, Climate Resilient Economic Development in Pakistan, was organised by the Sustainable Development Policy Institute, a Pakistan-based not-for-profit organisation, with the aim of pressuring government to prepare better for the impacts of climate change.

Pakistan, with a population of nearly 180 million, is considered to be one of the countries most vulnerable to changes in climate.

In each of the years 2010, 2011 and 2012, devastating floods hit the country, with hundreds of people killed and millions forced from their homes. IAnd in 2013, the farming sector was hit by a serious drought.

Qamar uz Zaman, a former director general of the Pakistan Meteorological Department, told Climate News Network that there are signs that the summer monsoon rains – vital to millions of the country’s farmers – are well below normal, which only adds to the country’s problems.

Germanwatch, an independent organisation promoting sustainable development policies, produces an annual assessment of countries around the world most exposed to climate-related risks.

In its latest risk survey – based on events and statistics collected for the year 2012 − Pakistan is ranked third most exposed country, after Haiti and the Philippines.

Ahsan Iqbal, deputy chairman of the Planning Commission of Pakistan, told Climate News Network that the government was prevented from responding to climate change due to a lack of funds.

He said: “The country has suffered economic damage of more than US$16bn as a result of floods in recent years – and it now needs more than US$20bn to restore infrastructure to pre 2010 levels.”

Delegates at the seminar said the government was reducing, rather than increasing, expenditure on climate-related mitigation and adaptation projects. A Climate Change Division, overseen by Nawaz Sharif, the prime minister, had a budget of only US$350,000.

“The paltry allocation for the Climate Change Division indicates that the government is dismissive about the grave challenges of climate change, despite highlighting its far-reaching impacts on the economy,” said Shafqat Kakakhel, a former deputy executive director of the United Nations Environment Programme.

Deforestation is seen as one of the main reasons behind the floods and devastation of recent years.

Rehana Siddiqui, a forest researcher at the Pakistan Institute of Development Economics, told the seminar that Pakistan had the highest deforestation rate in Asia, and if trees continued to be cut down at the present rate, the country’s forests would vanish completely within 35 to 40 years.

Siddiqui said that tree loss meant more flash floods, landslides and erosion, yet there was no national programme on how to regenerate forest cover.

This article was produced by the Climate New Network

Saleem Shaikh is a climate change and science journalist based in Islamabad.