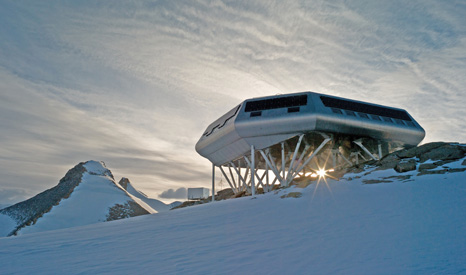 Princess Elisabeth base in Antarctica, the only zero emission base in the region (Pic: International Polar Foundation)

Possible errors in the interpretation of satellite data may help to explain scientists’ puzzlement over indications that sea ice cover is apparently increasing in the Antarctic, but is shrinking visibly in the Arctic.

One cause for head scratching is in the Antarctic, where the sea ice seems to be getting bigger when it ought to be shrinking, and another has been the apparent slowdown overall in the rate of global warming for the last decade.

Climate scientists around the world have been picking away at both puzzles, and not just because climate sceptics and energy industry lobbyists use them as ammunition to argue that global warming is not a problem at all.

Scientists are naturally unhappy when data doesn’t match their predictions − and they want to know the reason why.

The Antarctic problem is hard to miss. The Arctic Ocean sea ice is shrinking visibly, and the entire sea could be ice-free most summers in a few decades.

But even though there is clear evidence from separate sources that West Antarctica is responding to climate change, the southern hemisphere ice cover, overall, has been increasing.

Or has it? Ian Eisenman, a climatologist at the Scripps Institution of Oceanography at the University of California San Diego, begs to differ.

He and colleagues report, in The Cryosphere journal, that it could be due to an error in the way satellite data is processed.

Scientists have been using satellite data to check sea ice cover for 35 years. But the data does not come from one instrument on just one satellite: observations transmitted from a series of satellites have been spliced together.

One report from the Intergovernmental Panel on Climate Change said the sea ice cover was more or less constant, but a later report said it had grown by 16,500 square kilometers a year between 1979 and 2012.

“When we looked at how the numbers reported for the trend had changed, and we looked at the time series of Antarctic sea ice, it didn’t look right,” Dr Eisenman said.

The researchers think that the difference between the two datasets might be linked to a change in satellite sensors in 1991, and the way the data collected by the two instruments was calibrated.

What the Scripps team has done is identify a source of possible error, but it hasn’t settled the question one way or the other.

Since the Arctic and Antarctic are very different places, it would be unrealistic to expect the patterns of melting to be the same. And it may still be that southern hemisphere sea ice is growing.

However, while that question remains open, there is less doubt about the long slowdown in the rate of average global warming during the 21st century.

Separate teams of researchers have proposed a series of possible explanations for the failure of the climate to keep up with the projections of the climate scientists.

These have included the suggestion that the missing heat may be “concealed” in the deep oceans, and that a pause in warming was going to happen anyway, but it just happened earlier than anyone expected.

Shaun Lovejoy, professor of physics at McGill University in Canada, reports in Geophysical Research Letters that there is yet another explanation.

He argues, from statistical analysis, that coincidentally with the increase in man-made emissions of greenhouse gases, there has been a natural cycle at work, and that the most recent human impact on climate has been damped down by a cooling phase.

He had already ruled out with 99% certainty the possibility that natural variation could explain all the ups and downs of global average temperatures since 1800. This time he used the same statistical approach to the data for the 15 years from 1998 to the present.

His research suggests that there has been a natural cooling of 0.28°C to 0.37°C since 1998, which is in line with natural variations that occur every 20 to 50 years. “The pause has a convincing statistical explanation,” Lovejoy says.