UK energy secretary warns right-wing parties could destabilise the climate for investment in energy, including renewables 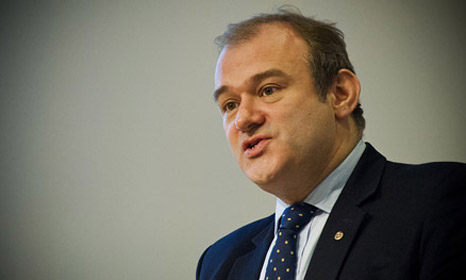 Ed Davey: “The colour of growth is green”

“The colour of growth is green,” Davey told business leaders at a conference in London, but investment in energy infrastructure could “melt away” if political consensus breaks down.

The energy department estimates more than £45 billion was invested in electricity generation and networks between 2010 and 2013, of which almost £29 billion went to renewables.

Davey’s centrist Liberal Democrat Party brought in legislation to support further investment, in coalition with the Conservatives and backed by the opposition Labour Party.

That cooperation is under threat from UKIP, according to Davey.

UKIP wants the UK to leave Europe and won 24 of the UK’s 73 seats in the European Parliament earlier this year.

Its energy manifesto proclaims climate change is “so last century”. It calls for the rehabilitation of coal and scrapping of subsidies to wind and solar generators.

“Not just in energy, but across the piece. Because who will want to invest in a backward looking, isolated country in denial of global truths? Inconvenient though such truths may be.”

“If the next government were to fall prey to the populist siren call of micromanaging purchasing and prices, without any regard for the reality of the international markets, the result could be the same.

“When you introduce this kind of political uncertainty – the costs go up.”

By October, member states are aiming to agree a climate and energy framework out to 2030.

A draft package published in January set out targets to reduce carbon emissions by 40% and get 27% of energy from renewable sources. An energy efficiency target is also under consideration.

“The decisions we are making in Europe this year and next year have never been so important in terms of its long term economic interests,” said Birol.

“Increasing domestic production and energy efficiency should be at the heart of the European energy policy.”

Meanwhile, there are efforts to reform the EU emissions trading system, which determines the price of carbon pollution.

The market is swamped with 2 billion surplus allowances, partly as a result of the economic downturn, driving the price down to around €5 a tonne. That makes it an ineffective driver for emissions reduction.

The European Commission is proposing a “market stability reserve” to regulate supply.

“Reform of the carbon market is crucial in Europe and if it doesn’t happen, low carbon investments in Europe may get a very strong hit,” said Birol.

The price would need to be 10 times higher to drive a shift from coal, which is currently cheap, to less polluting gas-fired power generation, he added.

The UK government is calling for more radical action than the market stability reserve. It wants to see “an ambitious volume” of allowances cancelled altogether.

In a statement released on Wednesday, Davey said: “The UK is asking for bold and comprehensive reforms to restore the ability of the EU’s emission trading system to drive cost-effective emission reduction and low carbon investment.

“A glut of emission allowances on the carbon market has thrown the system off course. This is delaying the low-carbon investment that countries need now to meet long term targets, and thwarting the economic growth that these investments will bring.”

Sandbag, a UK-based NGO that campaigns for effective carbon markets, welcomed the intervention.

Damien Morris, head of policy at Sandbag, said: “The Commission’s proposal to fix the EU carbon market is not, by itself, sufficient to put the scheme on track to cost-effectively achieve Europe’s long-term climate goals.

“An increase in environmental ambition is also urgently needed, and cancellation is the obvious way to achieve this. The UK position should embolden others to stand up and be counted in the months ahead.”