Merkel returns to climate politics with call for EU leadership 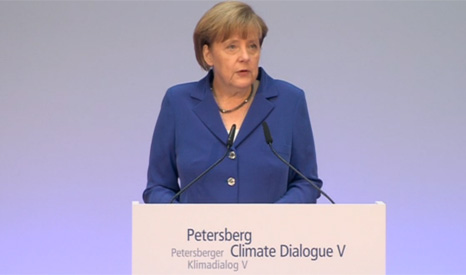 Angela Merkel has stressed her commitment to a tough UN climate change agreement in 2015, promising German and EU leadership over the next 12 months.

Addressing environment ministers and UN envoys in Berlin, Merkel also pledged €750 million for the initial capitalization of the UN’s new Green Climate Fund, which needs $15 billion by the end of 2014.

“We have to be aware of what it will cost if we don’t act… every delay will cost – the Stern review has made that clear,” she said, referring to a 2006 UK government study on the future costs of climate change.

Merkel said it was up to the world’s major economies to take a lead on cutting carbon pollution and investing in green energy, complaining that “necessary decisions have been delayed”.

She said the European Union would deliver an ambitious climate and energy package by October this year, promising a “clear signal” to the rest of the world.

“We want to have a 40% reduction of greenhouse gases in the EU…we want to increase the share of renewables by at least 27%,” she said, adding that she backed efforts to boost EU energy efficiency goals.

Merkel’s support for the 40% target is likely to be critical as the EU’s 28 member states renew negotiations on energy plans, with some eastern states opposed to the 40% goal.

She also backed plans to reform the EU’s beleaguered emissions trading scheme, referring to an “enormous over-supply of allowances” which offered “little incentive right now to carry out reductions.”

Germany’s national energy plan – set to be released in a few months – would also detail how the country plans to ramp up its clean energy capacity, she said.

A former environment minister who chaired the 1995 UN climate summit in Berlin, Merkel recently revealed that climate change would be a central part of Germany’s G7 presidency next year.

Looking tired after a flight back from watching Germany win the World Cup in Brazil, she bemoaned the lack of awareness of future climate impacts, despite recent reports by the UN’s IPCC climate science panel.

But she said a recent visit to China had left her optimistic about the future, and confident that the leaders of the world’s largest carbon polluter saw the merits in cutting pollution.

“I want to be clear here – we have seen and witnessed positive signals, the political leadership [in Beijing] is quite aware of the size of the task,” she said.

“We are being clear…this does not mean renouncing prosperity and wealth. If we agree on more ambitious targets, growth and climate protection can go together.”

The €750m new funding for the UN’s Green Bank will be welcomed by many environment groups, but much may depend over the timeframe for disbursement.

Greenpeace Germany’s Martin Kaiser welcomed Merkel’s comments on the GCF and EU 2030 targets, describing the speech as a “clear starting point for her to re-engage” into the UN climate talks.

But he said the real test will come at the EU Council meeting in October, and over federal plans to address rising domestic emissions and coal use.