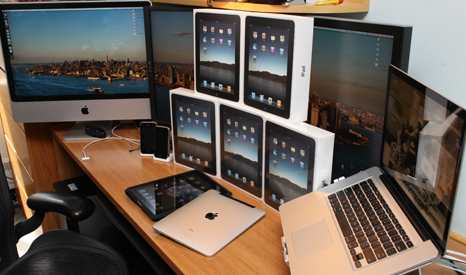 Apple discovered it was under-reporting emissions from manufacturing aluminium used in its products
(Pic: Flickr/Yutaka Tsutano)

Apple reduced its carbon footprint by 3% between 2012 and 2013 to 33.8 million tonnes, according to its latest environmental responsibility report.

The consumer electronics giant has won plaudits for its investments in renewable energy at corporate offices, retail stores and data centres.

CEO Tim Cook told investors in April climate change is a “real problem” as he outlined the company’s commitment to environmental improvements.

The modest decrease in Apple’s overall carbon footprint shows those efforts are dwarfed by the impact of its manufacturing, which accounts for nearly three quarters of emissions.

The report says: “We’re striving to reduce that footprint, and we’re making great progress. But there’s still a lot of work to be done.”

Apple also admitted emissions from manufacturing aluminium to use in its products were nearly four times higher than previously thought. It claimed the earlier assessments were made using “industry-standard methods” but an “extensive survey” of Apple’s suppliers revealed the figures to be inaccurate.

As a result, the reported emissions for 2013 were 9% higher than in 2012. When the 2012 figures were recalculated to correct for under-reporting of aluminium manufacturing emissions, it showed a 3% drop.

It does not provide evidence of any such carbon cutting activity on the energy-intensive manufacturing side, however, much of which takes place in China.