Leaders are heading to Paris, Berlin and Fortaleza for climate talks to lay the groundwork for a global deal 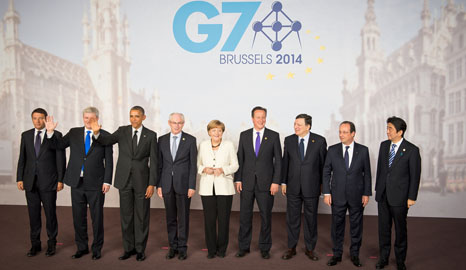 The three-day Major Economies Forum will be followed by the Petersberg Climate Dialogue in Berlin, while on Monday leaders of the BRICS group made up of Brazil, Russia, India, China and South Africa gather in Fortaleza, Brazil for three days of talks.

The meetings mark the start of what it likely to be a significant push by the UN seek convergence on how a global climate change deal, scheduled to be signed off in 2015, could work.

UK climate and energy minister Greg Barker, who heads to Paris today, tells RTCC more progress is needed working out the basics of that agreement, ahead of a December UN summit in Lima.

“While I am not turning cartwheels, I do detect an increasing confidence, at least that our leaders are engaging and people are more serious about an ambitious treaty than ever before,” he says.

“Doing some of the hard yards in advance of Paris is going to be critically important.”

On my way to Paris for Major Economies Forum on Energy & Climate; #MEF can help build #climateambition towards #Paris2015

Founded by the USA in 2009, the MEF is made up of 17 parties, including the EU, China and other emerging economies.

Its primary focus so far has been on accelerating the deployment of green technologies around the world – specifically in developing countries.

The forum, to be chaired by France Foreign Minister Laurent Fabius, is also likely to see further discussions between rich and poor countries on the level of carbon cuts they will be expected to make for the UN climate deal.

Speaking on Wednesday after meetings in Beijing, US climate envoy Todd Stern said negotiations with his Chinese counterpart Xie Zhenhua would continue in Paris on this theme.

“By 2020 they will probably be about twice the size of the US, in terms of emissions, because they are still growing rapidly, and we are going down. So, yes, absolutely, they have to be part of it,” he said.

While the setting for the Paris meeting is significant, given it will stage the 2015 UN climate summit, the keynote speaker at the Berlin Petersberg Dialogue is equally important.

German chancellor Angela Merkel played a key role in talks over the last major climate deal, the Kyoto Protocol, which was agreed in 1997.

Since the 2009 Copenhagen talks, which ended in acrimony, Merkel has steered clear of climate politics, but Greenpeace Germany political advisor Martin Kaiser says this looks like changing.

She also promised to make climate change a central part of the 2015 G7, which Germany will host.

“What we expect from Merkel in terms of political signals is that she personally re-engages in the climate politics, that she will prepare Germany’s contribution to the Ban Ki-moon climate summit, that means Germany is ready to contribute to the Green Climate Fund, which would be important to unlock the climate talks,” says Kaiser.

The Dialogue marks the last major chance for environment ministers to exchange notes before the Ban Ki-moon climate leader’s summit, where heads of state are expected to reaffirm their commitment to the UN talks, and indicate their willingness to deliver substantial greenhouse gas emission cuts.

Despite its narrow focus, the BRICs meeting has the potential to be the most significant of all three, with emissions growth in China, India and Brazil a concern for policymakers.

Together the BRICs are responsible for around 40% of greenhouse gases releases annually, a figure that is likely to rise as their economies expand.

Next week the group plans to officially launch plans for a development bank, expected to start with capital of US$ 50billion, and a joint US$ 100billion emergency swap fund for financial crises.

Its spending power could be critical, given the trillions economists say are needed to build low carbon infrastructure in the developing world.

According to José Alfredo Graça Lima from the Brazilian Ministry of Foreign Affairs, the projects it funds will be “sustainable”, and aimed at poverty alleviation.

“This is a political symbol in a lot of ways. It has much to do with the G7 not living up to their financial promises that they made in 2008,” says Sameer Dossani from Actionaid International, who has closely followed the bank’s development.

Few details have emerged on what environmental safeguards the bank will have. Dossani expects these will be limited at first, with a primary focus on economic growth.

As usual the group is likely to release a statement that will mention its commitment to climate change, but specific negotiating positions will be left to August, when all but Russia will gather for a BASIC meeting.