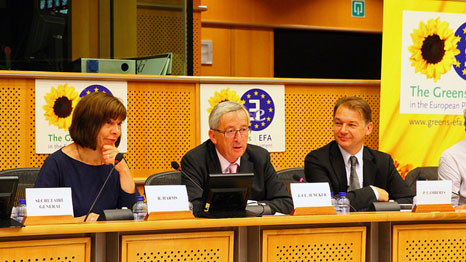 Future EU Commission president Jean-Claude Juncker has said that he is personally against fracking.

“I tend to be cautious even if that’s old-fashioned. I don’t rush into new technologies,” he said.

Fracking is a method of extracting gas and oil from shale rocks by injecting a mixture of water, sand and chemicals at high pressure into the ground.

The US has tapped into vast supplies of gas and oil using the technique, making it one of the largest fossil fuel producers on the planet.

Some European governments such as the UK and Poland believe it could be the answer to their energy security fears, but environmentalists have raised concerns on a number of grounds.

These include the potential of fracking techniques to pollute water supplies and lock countries into reliance on another source of carbon-emitting fossil fuels, diverting resources away from renewable energy.

Juncker, whom Europe’s heads of states nominated for the EU’s top job, must now be approved by the Parliament before he can take on the role.

Margrete Auken, a Danish Green MEP, said that she felt the Greens should support Juncker following his “acceptable” answers today, although she added it was likely to be a divided debate.

“I think we’re going to look into whether he is so bad that we have to reject him. Personally I don’t think so. I think we can support him,” she told RTCC.

The EU has no control over whether countries choose to exploit their shale gas resources, but can monitor how they undertake the process.

Currently, regulations are determined at the level of member states, with no obligation at an EU level to undertake an environmental impact assessment.

In January, the Commission recommended certain controls on the fracking industry to be implemented by member states. These were a disappointment to anti-fracking campaigners, who had hoped for a stronger set of binding regulations.

But regulations could become a live issue once again under the new Commission, who will have to deal with ramped up concerns over energy security, thanks to a conflict between Russia and Ukraine.

Juncker will also have a seat at the EU Council, which has to finalise the EU’s 2030 policies on energy efficiency, renewables and greenhouse gas cuts by October this year.

The future Commission’s president views could sway the direction of the discussions, said Luca Bergamaschi, a researcher at environmental think-tank E3G.

“It could definitely influence the debate. I think the process of the next three to four months will basically decide whether shale gas will have a future or not,” he said.

Bas Eickhout, a Green Party MEP, tweeted that it “remains unclear” whether Juncker will push for stronger regulation, in spite of his personal dislike of shale gas.

He told RTCC that while Juncker admitted he is currently unfamiliar with the topic, he believed that “his intentions are good” and that he appeared to be “more on the positive side of the European People’s Party”, the conservative group of which Juncker is a member.

On shale gas Juncker states he’s against fracking personally. But whether he will push for tough regulation remains unclear. #JunckerTest