UN officials say there is ‘greater clarity’ over 2015 climate deal

Countries are converging on what pledges towards a global agreement should look like, say co-chairs of talks 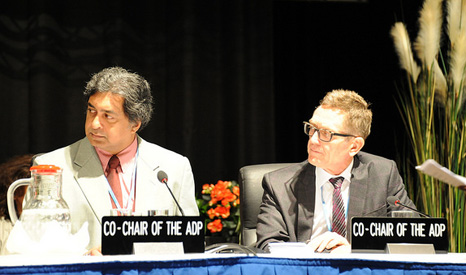 The two officials chairing UN climate change negotiations say it is now clearer how a deal to cut global greenhouse gas emissions could come together in 2015.

Reflecting on two weeks of talks in June, Artur Runge-Metzger and Kishan Kumarsingh say there is now an opportunity to develop a draft text for agreement by November.

“There is now greater clarity on the way forward on many of the substantive areas and progress has been made towards identifying a limited number of political choices that need to be made for a successful agreement in 2015,” they say in a new document on the UN website.

Specifically, they say the framework of national pledges to a UN climate deal, and the need for finance and technology support are areas of agreement among all parties.

German diplomat Runge-Metzger and  Kumarsingh, from Trinidad and Tobago, are tasked with helping the 195 parties to the UN’s climate body develop a fair way of ensuring the world does not warm 2C above pre-industrial levels, beyond which more extreme weather events could be expected.

Central to the success of the proposed 2015 agreement will be the delivery of Intended Nationally Determined Contributions (INDCs) which will outline the level of GHG cuts planned by governments.

The chairs say a March 2015 deadline for these to be sent to the UN is still realistic, adding that they may also contain financial and adaptation commitments.

National envoys have one more meeting in October before they head to Lima in December for the annual UN climate summit, usually attended by environment ministers.

“Building on the strong substantive progress made in June, the October session is a window of opportunity not to be missed to deepen negotiations in relation to both the elements for a draft negotiating text and information on INDCs,” say Runge-Metzger and Kumarsingh.

UN climate chief Christiana Figueres wants a draft text ready by the start of that meeting, so countries can start negotiating on the final aspects of a treaty, scheduled to be signed off in Paris next year.

Further details on how a global deal will work may be revealed at a specially convened climate leader’s summit in New York, hosted by UN chief Ban Ki-moon on September 23.

Ban wants heads of government, NGOs, city mayors and business CEOs to arrive with “concrete proposals” outlining how they plan to address their carbon footprint.