Governments in Islamabad and Delhi are not preparing for potential climate impacts, says new research 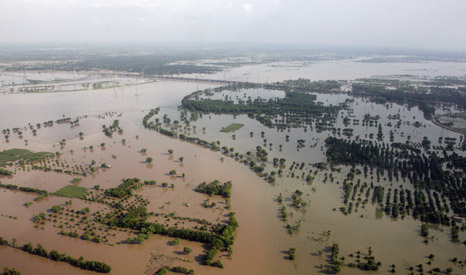 By Nivedita Khandekar in New Delhi

A study of the five countries sharing and relying on the Indian sub-continent’s great rivers shows that Bangladesh is the only one that is taking climate change seriously.

Even before this year’s delayed and inadequate monsoon recently brought some relief to the Indian sub-continent, researchers discovered widespread concern by local experts that their governments are mismanaging the water supplies on which a billion people depend for survival, and giving insufficient attention to climate change.

A new report, Attitudes to Water in South Asia, explores domestic water management and transboundary water issues in five countries – Afghanistan, Bangladesh, India, Nepal and Pakistan. It focuses on two river systems, the Ganges-Brahmaputra-Meghna and the Indus-Kabul basins, which are vital to the lives of a vast population.

Chatham House – the home of the Royal Institute of International Affairs − worked on the report with India’s Observer Research Foundation, and similar partner organisations in the other four countries.

Their findings are based on evidence from almost 500 interviews conducted in the five countries in 2013 with a range of water experts, government officials, policy-makers and decision-makers from NGOs and the private sector.

Observing that water is “highly politicised in the region, with strong links to food security and the livelihoods of the large proportion of the population dependent on agriculture”, the report underscores the relation between the domestic mismanagement of water in each country and the failure to address transboundary water relations.

“In spite of the shared river system and the interdependencies, South Asian governments have signed few bilateral water agreements and no regional ones,” the report says.

“Those transboundary water treaties that do exist face criticism on a number of grounds: for time periods too short to too long; and for their lack of provision for environmental factors or new challenges, such as climate change.”

Yet the ability of countries in South Asia to deal with the possible effects of climate change will be in part determined by their ability to manage water, and also how they deal with weather events such as floods and droughts.

“While many respondents across the region felt that other immediate concerns were more pressing, the majority of those interviewed expressed concern that their governments were giving the issue of climate change insufficient attention,” said Gareth Price, a senior research fellow at Chatham House and lead author of the report.

For instance, in Afghanistan, even where respondents had some knowledge of the body responsible for setting government-wide policy on climate change, they were equally certain that the amount of practical action on ground was virtually zero.

In Bangladesh, where most respondents were acutely aware of climate change and its possible effects, many said their government was doing better. There was a general consensus that ministers had made climate change a priority by setting aside funds for adaptation and mitigation.

However, Afghani and Bangladeshi respondents noted the lack of availability of important policy documents − currently available only in English − in local languages..

And Indian respondents felt that climate change was not a major priority for the government, although it was widely recognised that it could wreak havoc on the country.

“Inadequate water storage leaving farmers vulnerable to the vagaries of weather suggest an urgent need for appropriate investment in such facilities in order to not just increase agriculture production, but also to ensure farmers have an option to adjust to changing climate,” the report says.

Climate change could also have a big impact on the transboundary water relations, the report warns.

Some respondents from India and Bangladesh feared that a variation in the timing and intensity of monsoons could affect agricultural production and weaken food security, “driving tension between the two countries over access to water in a dry period”.

Interviewees from Nepal perceived climate change as a “future threat”, in comparison with immediate challenges and the need to increase access to water and electricity.

Most respondents felt that Nepal’s approach was “inadequate” and pointed out the gap between national plans and local implementation.

Pakistani respondents believed their country’s approach to climate change lacked “urgency”. They particularly pointed out that a Ministry of Climate Change had recently been reduced to a mere division of another ministry, and had had its funding slashed by 62%.

The report quoted a climate change expert working with the Pakistan government, who said his country stood on the brink of an environmental cataclysm, with the seasonal monsoon shifting away from traditional catchment areas towards Afghanistan.

“This trend, reinforced by climate change, [has]increased the likelihood of extraordinary rainfall patterns, cloudbursts, and flash floods,” he said.

The researchers’ recommendations Include: improving domestic water management, and rainwater harvesting; enhancing data collection, data sharing and discussions between the five countries, particularly in relation to floods and droughts, and the management of watersheds and river basins; easing water demand through less water-intensive crops and irrigation methods.

They also stress that existing treaties should be revisited, ensuring that they address technological advances, environmental factors and climate change.

Nivedita Khandekar is a journalist based in New Delhi, focusing on environmental and developmental issues. She has worked at the Press Trust of India, India’s premier news agency, and the Hindustan Times, one of the leading national daily newspapers in India. Her journalistic achievements include a national award for environmental reporting, an award for reporting on health issues, and a Rural Reporting Fellowship.