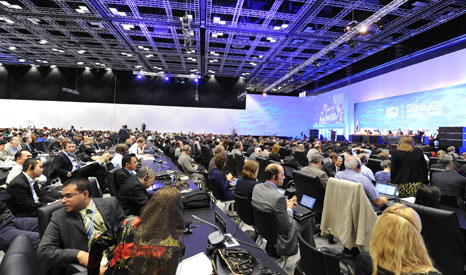 Decisions by the 195 parties to the UN climate talks need to be agreed by ‘consensus’ (Pic: UNFCCC/Flickr)

UN climate talks are unlikely to succeed in preventing dangerous levels of global warming unless the number of countries involved in talks is drastically cut.

That is the key finding in a new study published in Nature Climate Change, which outlines a range of options to allow negotiations to proceed more smoothly.

Instead of discussions involving 194 countries, initial action should be limited to the 17-strong Major Economies Forum, a loose forum comprising of the world’s top carbon polluters.

The paper also argues for countries to promote trade benefits as an incentive to slow emissions growth, targeted at climate-friendly technologies and in renewable energies.

The authors, Timmons Roberts and Marco Grasso, also recommend countries calculate emission cuts based on their consumption rather than production patterns.

“People are seeing after 22 years that the full 194 countries is very maybe too cumbersome – at least to have a leadership group,” Roberts tells RTCC in an interview.

“For me the big treaties we’ve seen, there has always been a big powers approach, agreeing together to move, and then the other countries come in.”

The apparent gridlock in global talks in the past five years has made negotiators more willing to explore ‘mini-lateral’ alternatives, Roberts added. 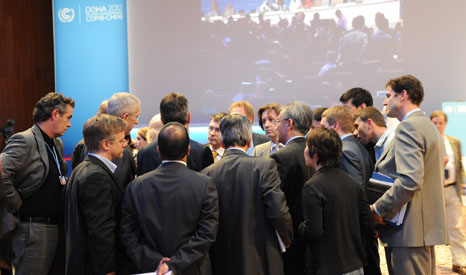 A hierachy already exists at the UN talks, with negotiators from the US, China, EU and Russia dominating talks (Pic: UNFCCC)

The UN is currently working on a plan to sign off a global emissions reduction deal in Paris next year, with a draft agreement scheduled for delivery at a Lima summit in December.

The world’s leading economies are expected to reveal what levels of cuts they can offer by March 2015, with the EU primed to deliver a 40% GHG cut on 1990 levels by 2030.

On the basis of current emission reduction pledges, the world is likely to warm 3-5C by 2100, placing huge strain on water and food resources, and leading to rising sea levels and an increase in extreme weather events.

Many developed and developing countries remain divided over who should make the toughest carbon cuts, and who should pay for new clean energy systems.

Any final agreement in Paris will have to be agreed by consensus, opening the possibility that fierce opposition from a few of the 194 parties could scupper a deal.

The Nature study argues that experience of other international negotiations indicate a small ‘great powers’ leadership group is essential for the talks to succeed.

According to the authors, the 17-strong MEF is the ideal forum because “its limited size avoids the manifest cumbersomeness of the UNFCCC universalism, while at the same time it is a group of countries sufficiently broad to have global impact and exert global leverage”.

But it is regarded with suspicion by many excluded countries, and few UN observers RTCC has spoken to believe Brazil, Russia, India, China and South Africa would leave the safety of UN talks, where they can call on the support of huge coalitions of poorer nations.

“The idea is to see what you get with a smaller group of economies. Is it more manageable and does it get you to a solution?”

The move would likely alienate two key negotiating groups, the 48-strong Least Developed Countries and the 44 countries making up the Alliance of Small Island States.

Both play a critical role at UN summits, holding high carbon polluters to account and pushing for tougher targets to limit warming to 1.5C above pre-industrial levels.

The EU, AOSIS and LDC alliance in 2011 was widely credited for pushing the US and China towards a 2015 global deal, and Roberts argues the idea is less to exclude, but more to focus on what various groupings can deliver.

“The idea is not to have the Least Developed Countries or AOSIS on the hook for emission reductions. In Africa they need to increase their energy use to deal with basic human needs,” he says.

“This is about obligations, not about other parts of the equation like addressing vulnerability and building resilience. It’s excluding them from the first round of obligations, and saying we want you to come in, when you’re ready”