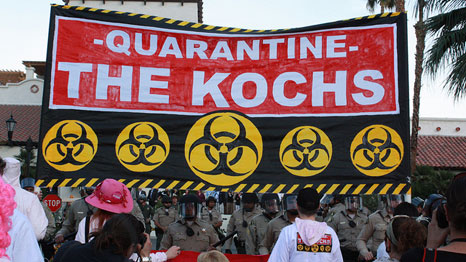 A US lobby group closely linked with President Barack Obama has launched a campaign against the Koch brothers, the American multibillionaires with a record of funding climate denial.

Following a Koch brothers’ announcement that they would fund a US$ 300million campaign backing the Republican Party in 2014, the pro-Obama group Organising for Action called on environmentalists to fight back.

Some of the Koch brothers’ money will be directed towards opposing Obama’s plans to regulate carbon pollution from power plants, the most significant piece of climate policy from the president so far.

Organizing for Action is an independent group formed off the back of Obama’s 2012 election campaign, which advocates for Democratic policy objectives. “It was spun into a non-profit to mobilise Obama’s agenda,” said Jake Schmidt, international climate policy director at the Natural Resources Defense Council.

The group accused the Koch brothers of having a “game plan” to “spend as much as humanly possible to get their way”.

The campaigners have already launched another campaign to call out climate change deniers in Congress. “The Koch brothers are feeding that with money and resources,” added Schmidt.

A report by Greenpeace found that the Koch brothers, who owe their wealth to their father’s manufacturing company, gave $67,042,062 to organisations denying climate change between 1997 and 2011.

Obama has confronted climate sceptics more vigorously during his second term. Recently, he compared climate change deniers to those who believe the moon is “made of cheese”, adding these beliefs posed a “fairly serious threat to the future”.

Addressing graduates in California, he said: “Today’s Congress, though, is full of folks who stubbornly and automatically reject the scientific evidence about climate change. They’ll tell you it’s a hoax, or a fad.”

A poll released today by the Yale Project on Climate Change Communication found that US voters are 2.5 times more likely to vote for a congressional or presidential candidate to supports action to tackle global warming.

They also found that voters are three times more likely to vote against a candidate who opposes this action.