US water stress may drive shift to renewable power

Thermoelectric power including gas, coal and nuclear responsible for 40% of US water use 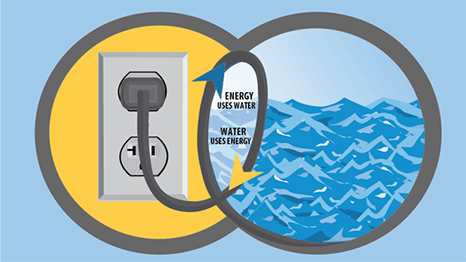 Climate change may drive a shift to more wind and solar power generation, to conserve water, a U.S. Department of Energy report said this week.

The report found a risky mutual dependence between water and energy.

Energy was needed to pump, treat and transport water, while water was needed to cool electricity generating equipment in thermal power plants such as gas, coal, nuclear and concentrated solar power.

Such thermoelectric power accounts for 40% of all U.S. freshwater use.

Climate change including more storms and droughts would intensify those mutual risks, the report said.

“When severe drought affected more than a third of the United States in 2012, limited water availability constrained the operation of some power plants and other energy production activities,” said the report, “The Water-Energy Nexus: Challenges and Opportunities”.

“Shifts in precipitation and temperature patterns—including changes in snowmelt—will likely lead to more regional variation in water availability for hydropower, biofeedstock production, thermoelectric generation and other energy needs. Rising temperatures have the potential to increase the demand for electricity for cooling.

“These changes and variations pose challenges for energy infrastructure resilience.”

Solutions included less water-intensive forms of power generation including wind and solar photovoltaic (PV) power; greater efficiency of fossil fuel generation; and the use of alternative water supplies, ranging from “produced water” in oil and gas extraction to solar-powered desalination.

The report calculated that the U.S. energy mix was already moving in the right direction, towards using less water, as result of rising wind and solar power generation, replacing coal.

Among thermoelectric generation technologies, nuclear power was the most dependent on water, withdrawing around 45,000 gallons per megawatt hour, followed by gas, coal, concentrated solar and geothermal power.

The link between thermoelectric power and water was growing more dangerous because of climate change, the Department of Energy report said.

Rising temperatures would put a premium on water supplies.

“Although the extent varies by region, nearly the entire country has experienced increased average temperatures, a trend that is expected to continue,” the Department of Energy said.

Climate change would add to other risks including rising migration to water-stressed regions such as California.

California is at present enduring one of its most severe droughts in decades, with most of the state’s reservoirs presently around half historical levels for the time of year.

“Projected population growth in the arid Southwest will amplify pressure on water and energy systems in that region,” the report said.