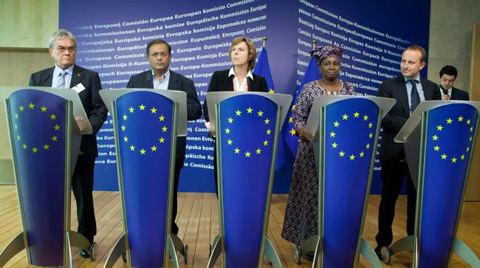 A quarter of European Union member states say that they want a binding target for energy efficiency in 2030, in the run-up to a decision to be made by leaders in October.

The EU executive, the European Commission, proposed in January deep cuts in carbon emissions and a target for deploying renewable energy, and is due in July to propose steps to boost efficiency.

Seven countries wrote on Tuesday to the European Commission President, Jose Manuel Barroso, supporting a binding target for an absolute cut in energy consumption compared with 2020.

Some countries and industry see targets to boost energy efficiency as a no-brainer, to help the EU maintain a competitive edge and cut the cost of Russian gas imports, especially in the wake of the Ukraine crisis.

Others worry about the upfront costs, especially if these are passed on to energy prices which are already some of the highest in the world.

“The current situation in the Ukraine emphasises the importance of reducing dependence on imported oil and natural gas,” said the signatories of the letter, Belgium, Denmark, Germany, Greece, Ireland, Luxembourg and Portugal.

“Reduction of energy consumption through energy efficiency is the most robust and cost effective means of increasing energy security and reducing emissions of greenhouse gases, and there is still a considerable economic potential for energy efficiency improvements in most areas.”

“The signatories of this letter share the conviction that the (European Commission) should present a proposal for a binding target for energy efficiency in 2030.”

“A target is essential to highlight the importance of energy efficiency, and a strong political commitment is crucial to secure the necessary policies and measures, including financing at the EU level and at the national level.”

The letter showed jostling ahead of a major decision to be taken by EU leaders in October on the bloc’s energy and climate strategy for the next 15 years.

It showed that most countries were either on the fence or would not support a binding efficiency target.

In particular, no east European countries signed the letter, suggesting that an agreement is at best elusive.

East European economies are still lagging those in the west, making them wary about environmental policies which they fear may limit growth, and in particular countries more dependent on coal, such as Poland.

Poland obstructed in March a decision on the so-called “2030 framework for climate and energy”.

The EU presently has a non-binding to target to improve energy-efficiency in 2020, including energy consumption limits which EU member states are expected to exceed.

In 2012, the EU’s oil and gas import bill was more than €400 billion, as reported in the World Energy Outlook (WEO) of the International Energy Agency.