Australian reef could be more resilient to warming than thought, historical data shows 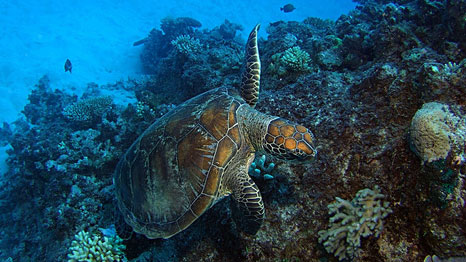 Australia’s Great Barrier Reef survived large sea temperature changes at the end of the last glacial period, suggesting that it may be able to survive climate change better than previously thought, a new study has concluded.

The Great Barrier Reef has evolved over several hundred thousand years, and in that time endured changes in sea surface temperatures.

The latest study shed new light on sea temperature changes from 20,000 years ago, at the end of the last glacial peak, or maximum, when the world warmed and northern ice sheets melted in a process known as “deglaciation”.

The researchers attributed that temperature difference to a weakening of the East Australia Current, which carries warm water south along the Australian coastline.

A weaker current allowed cool sub-tropical water to travel further north, meaning that temperatures differed by 2-3C across the reef.

The reef then withstood warming from about 13,000 years ago, especially at its southern end, painting a picture of temperature swings over the course of several millennia.

“Our findings indicate that the GBR experienced substantial and regionally differing temperature change during the last deglaciation, much larger temperature changes than previously recognized,” found the researchers, publishing in the journal Nature Communications.

“Combined with evidence for the existence of extensive reefs along the shelf edge seaward of the modern GBR at that time, our results provide new insights into the ability of coral reefs to adapt to temperature change. Overall, the GBR developed through significant sea surface temperature change and may be more resilient than previously thought.”

The world is presently still in an ice age, characterised by large ice sheets over Greenland and the Antarctic, but in a relatively warmer, interglacial phase.

The scientists based their estimates of historical sea temperatures on analysis of coral structures formed some 12,000 to 25,000 before the present day.

They estimated that sea surface temperatures now around the Great Barrier Reef are up to 3C warmer than they were at the last glacial maximum 20,000 years ago.

Because of the relatively rapid, estimated temperature changes, over a period of a few thousand years, they concluded that the present reef may be able to adapt to manmade climate change similarly, if given time.

“That adaption occurred over a few thousand years or less. This apparent resilience suggests that, considering temperature alone, southward expansion of robust reef crest community could be an important response to future climate warming.

“Questions remain on the timescales over which corals may adapt to temperature rise.”