Scientists agree that the Arctic is warming fast, but differ on the global impact 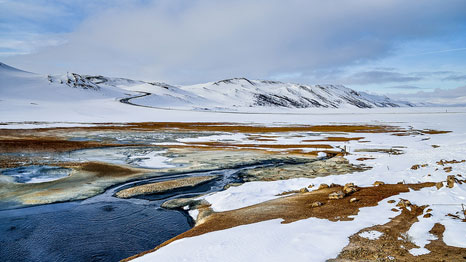 A warmer Arctic will mean fewer extreme cold spells in northern Europe and America, according to a study published in the journal Nature Climate Change.

Scientists agree that the Arctic is warming faster than the rest of the planet, with more sea ice melting each summer.

The trend seems to have acquired its own momentum, because open water absorbs more of the sun’s heat than ice.

The impact of a warmer Arctic on the rest of the world’s weather is much less well understood, however, and one of the hottest topics in meteorology.

The latest study argued that observations showed variability was falling, meaning that there was a narrower spread of temperatures over successive winters, with fewer extremes and a general warming up.

“This study shows that sub-seasonal cold-season temperature variability has significantly decreased over the mid- to high-latitude Northern Hemisphere in recent decades,” said the author, James Screen, from the University of Exeter, in an article published on Sunday.

The author used meteorological modelling to project that the trend would continue.

His view diverged from that held by other scientists, that Arctic warming may actually lead to more climate variability, both in summer and winter, citing the examples of severe winters in 2010/2011 and 2011/2012 in the eastern United States and Europe.

They have proposed that a warmer Arctic is slowing down the high altitude ribbon of wind known as the jet stream.

A slower jet stream tends to remain fixed in one place for longer, leading to more persistent weather patterns, including wetter, hotter, drier or colder conditions than normal, depending on where the winds is blowing from.

One possible explanation for the difference in viewpoints is the timescale of observations.

This week’s study examined trends over several decades since 1979, while the theory implicating a slower jet stream particularly refers to recent extreme weather events, including unusually cold and mild winters since 2009.

Climate scientists are increasingly concerned about the impact of climate change on weather variability.

That is because extremes such as droughts and floods may be more costly than steady decadal rises in temperatures, as argued by economists recently argued in the journal Nature.

“Weather variability is more important than average weather in determining impacts, particularly for crop growth and food security. For example, the yields of some crops may decline rapidly above certain temperatures.”

A recent report by the Intergovernmental Panel on Climate Change found that countries were unprepared.

“For countries at all levels of development, these (climate-related extreme) impacts are consistent with a significant lack of preparedness for current climate variability in some sectors,” it said.

This week’s study argued that for northern hemisphere winters, at least, the trend may be towards less variable weather as the climate changes.