El Niño means 2014 could be hottest year ever

Weather phenomenon plus global warming is recipe for the hottest year on record, says climate scientist 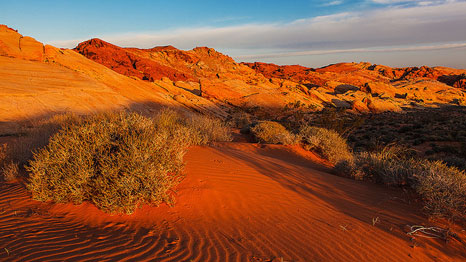 This year could be the hottest ever, due to the high possibility of an El Niño weather phenomenon.

Piers Forster, a professor of climate change at Leeds University, told RTCC that an El Niño combined with the effects of global warming, could make 2014 the hottest year on record.

“The prediction that 2014 will be the hottest year on record is a rough estimate but based on sound physics and the latest predictions for the growing El Niño during the remainder of the year,” said Forster. 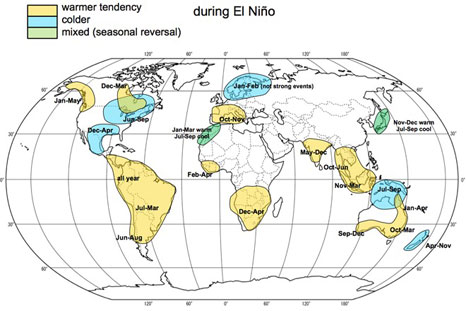 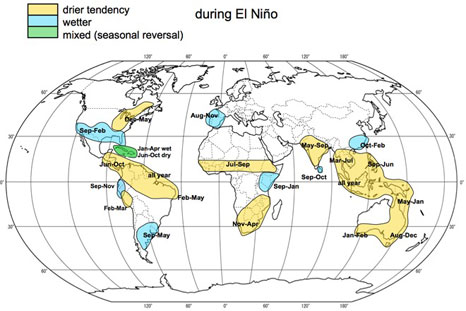 The European Centre for Medium-range Weather Forecasts predicts that there is a 90% chance of an El Niño hitting this year. During an El Niño, the ocean releases its energy into the air, warming surface temperatures, having a knock-on effect on weather patterns around the globe, including weaker monsoons in India and more hurricanes over the Pacific.

El Niño events can have a damaging effects on developing countries in particular, with a potentially devastating impact on agriculture. The 1997 El Niño, the strongest ever, cost around US$ 35-45 billion in damage and caused around 23,000 deaths worldwide.

Forecasts by NOAA show that the temperature of the El Niño region of the central Pacific is projected to increase by around 0.4 to 1.5C by late summer. Historic data suggests that, globally, temperatures increase by 0.08 C per degree of warming in this region, said Forster.

This, combined with background warming of around 0.01C a month from greenhouse gases, means there is a high chance that 2014 could be the hottest on record, he said.

Ed Hawkins, a climate scientist at Reading University, supported his findings. Both scientists contributed to the UN’s climate science report, the IPCC.

“I think there’s a reasonable chance it could be the warmest year on record given the El Niño forecasts,” he told RTCC, adding that there would be localised impacts as well as global warming.