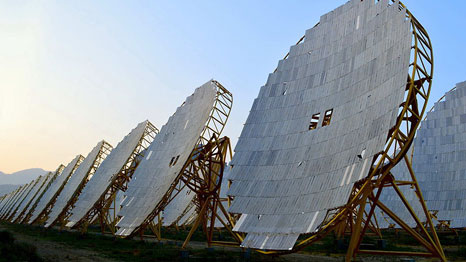 That is because solar PV is cheaper to install, especially at lower levels of sunlight.

But the United States is poised to quadruple its installed CSP capacity this year, with five new utility-scale plants, to 1.3 gigawatts.

The ability of CSP to store electricity adds an important grid benefit, according to a report by the National Renewable Energy Laboratory (NREL), a research arm of the US Department of Energy.

That will help states meet both renewable energy targets and still balance the grid.

Solar PV is variable according to the strength of the sun, and that creates a headache for grid operators because of its inability to store electricity.

By contrast, CSP can store electricity, and so can be used to back up variable solar PV instead of using gas or coal-fired power, found the NREL report, “Estimating the value of utility-scale solar technologies in California”.

The savings were generated by the avoided cost of both building and running back-up fossil fuel capacity.

The report focused on the state of California, because of its abundant sunshine and ambitious climate legislation: California’s renewable portfolio standard (RPS) requires the state to increase electricity generation from eligible renewable energy resources to reach at least 33% of total retail sales of electricity per year by 2020.

Beyond 2020, California targets a further reduction in greenhouse gas emissions to 80% of 1990 emission levels by the year 2050, which may require a greater roll out of renewable power in the longer term.

CSP works by using sunlight to heat a liquid oil, which can then either be stored or used to generate steam and drive a turbine. The heat can used to melt salt in insulated tanks; the molten salt releases heat as required when it re-freezes.

But CSP provides at least twice the benefit, because of its ability to store power, the NREL calculated.

The NREL report did not compare such benefits with the lifetime operating costs of solar power, dominated by the upfront cost of installing the equipment given zero fuel costs.

However, the Department of Energy recently updated its estimates for that levelised cost of energy (LCOE), in its Annual Energy Outlook 2014.

A crude comparison with the grid management benefits suggests that solar PV still has the value advantage, but CSP adds important flexibility.