Obama appeals to health benefits of acting on climate 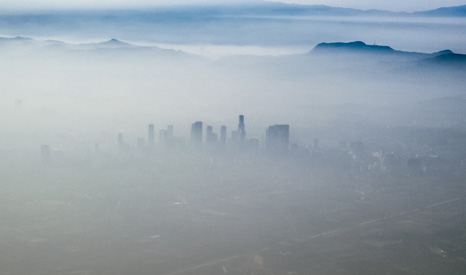 Layers of smog hanging over Los Angeles, one of the USA’s most polluted cities (Pic: Robert S Donovan/Flickr)

US President Barack Obama’s administration has appealed to the expected health benefits from cutting carbon emissions, as it tries to win the climate argument against Republicans in a polarised Congress.

Obama failed to gain support in the Senate in 2009 for a proposed climate bill, losing the battle on fears over higher energy prices in the midst of a severe financial crisis.

This time he is attempting to regulate carbon emissions through federal action, and the U.S. Environmental Protection Agency (EPA), by-passing Congress.

He has appealed to the expected local benefits to American’s health, keen to head off a voter backlash at mid-term elections in November.

Analysts have attributed US popular support for a ban on ozone depleting chemicals to the dangers of skin cancer.

The White House released last week a report, “The Health Impacts of Climate Change on Americans”, just five days after the EPA’s proposed ruling on carbon emissions, and said that there were visible health impacts from climate change already.

“The past three decades, the percentage of Americans with asthma has more than doubled, and climate change is putting those Americans at greater risk of landing in the hospital,” the report said.

“And extreme weather events are becoming more frequent across the country – from more rain falling in downpours in many regions, to longer and hotter heat waves in others, to more severe droughts and wildfires in some areas, notably the West and Southwest. Through commonsense measures to cut carbon pollution we can protect the health of our Nation, while stimulating the economy and helping to prevent the worst impacts of climate change.”

The EPA’s Clean Power Plan proposed to cut carbon pollution from the power sector by 30% by 2030, compared with 2005 levels.

The EPA itself was quick to reference health benefits from taking climate action, mentioning the word “health” five times in a one-page primer on its “Climate Action Plan”.

“The science shows that climate change is already posing risks to our health and our economy. The Clean Power Plan will maintain an affordable, reliable energy system, while cutting pollution and protecting our health and environment now and for future generations.”

First, climate change itself is expected to have a wide range of impacts, including heat stress more frequent and intense heat waves.

“From 1999 through 2009, extreme heat exposure caused more than 7,800 deaths in the United States,” the White House report said.

“Extreme heat events are increasing in the United States in frequency, intensity, and duration. As climate change causes temperatures to continue to rise, heat waves are expected to become more frequent and severe in the coming decade.”

Other direct climate health risks include: more ozone pollution in cities as a result of higher temperatures; dangerous smoke from more frequent wildfires; more pollen from longer growing seasons exacerbating hay fever; more physical accidents and psychological stress from more storms and floods; and the spread of diseases and their vectors such as ticks and mosquitoes.

Burning oil, gas and coal produce or contribute to local pollutants including mercury, smoke, sulphur dioxide and ozone, which cause respiratory and other problems.

“Since air pollution from power plants can worsen asthma and other breathing problems, putting these (EPA) guidelines in place will help protect the health of vulnerable Americans, including children and the elderly,” the White House report said.

Last month, Harvard University released a report which examined specifically the expected US health co-benefits from cutting carbon emissions, and in particular for improved air quality.

“For human health, these co-pollutants contribute to increased risk of premature death, heart attacks, increased incidence and severity of asthma, and other health effects.

“For ecosystems, these co-pollutants contribute to acid rain; the over-fertilization of many types of ecosystems, including grasslands, forests, lakes and coastal waters; ozone damage to trees and crops; and the accumulation of toxic mercury in fish. Therefore, policies intended to address climate change by reducing CO2 emissions … can have important human and environmental health co-benefits.”