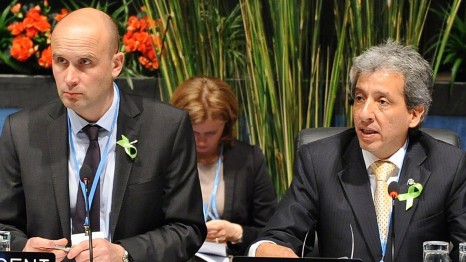 Countries must adopt a “realistic” approach to UN climate talks, says Peru’s environment minister, who warns that time has now run out to finalise every aspect of the new deal.

“Eighteen months it is not enough time to finish with all this discussion,” said Manuel Pulgar-Vidal, who will take over as president of the talks in December, in an interview with RTCC.

“So probably in Lima what we’re going to have is some very realistic narrative, to try to lift to Paris a draft agreement that could be signed by the end of 2015.”

Getting this draft agreement, which will outline what actions countries should take to tackle global warming, will determine the success of the conference taking place in Peru in December, he said.

The Lima conference is the last major opportunity for countries to find common ground before the 2015 conference in Paris, where the final deal must be signed. It is, says Pulgar-Vidal, “the most important ring in the chain.”

While time is running short, there are still many issues that need to be resolved, including which countries should take on the bulk of emissions cuts, and where funding for developing country low carbon investment will come from.

Ministerial discussions of this topic taking place last week in Bonn were bolstered by an improved relationship between the US and China, the world’s two largest emitters of greenhouse gases.

New US power plant carbon cuts and a potential Chinese carbon cap as early as 2016 boosted negotiations, although details on both initiatives remain at early stages.

According to the current UN talks president, Polish state secretary for the environment Marcin Korolec, relationships have improved as a whole over the past year, though it could still be difficult to reached consensus between the 195 countries within the process that is necessary to agree a new climate deal.

“If we need unanimity in decisions, the ministers and negotiators need to have a conviction that they will not be cornered somehow—that one group of countries will not push to the limits another group of countries,” he said in an interview with RTCC.

“The main goal for this year is to focus on building trust and confidence between parties.”

The EU is close to finalising the basis of its own contribution to the UN climate deal in the form of its own 2030 energy and climate package, set to be completed by October.

“If you are a newborn baby I guess eighteen months is a long time but if you are the UNFCCC process it’s not,” she said. “There are still many hurdles to overcomes. There are many real discussions still.”