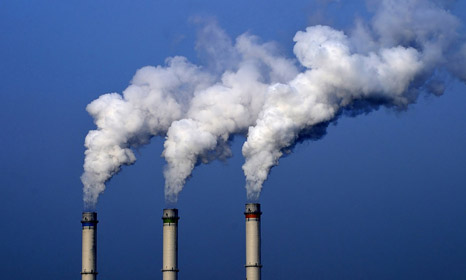 Chinese carbon emissions will continue to rise at current levels even if the carbon cap suggested by a Chinese official last week is implemented.

A rumoured peak of 11 gigatonnes of CO2 by 2030 would keep China on roughly the same course paved by its current policies, according to new analysis released on Saturday by Climate Action Tracker.

“If we have this emissions level, the 11 gigatonnes, that would be not ambitious enough. The trend is basically linear,” said Hanna Fekete, a consultant on international climate policies at Ecofys and one of the authors of the report. 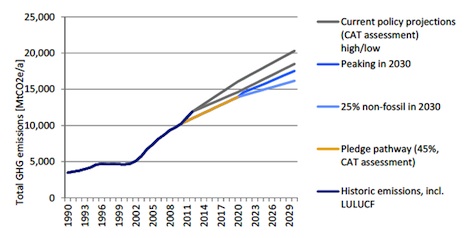 Speculation began that China would cap its emissions when its next five-year plan comes into force in 2016, following comments from He Jiankun, chairman of China’s Advisory Committee on Climate Change, at a conference in Beijing.

Chinese emissions would face absolute limits, he said, and would ultimately peak at around 11 billion tonnes of CO2-equivalent in 2030.

Currently, Chinese emissions targets are pegged to the size of the economy, with the aim of reducing emissions intensity by 45% per unit of GDP.

He added that the share of non-fossil fuels in China’s energy mix would reach 20-25% by 2030, compared to a current target of 15% in 2020. His comments, though not supported by the Chinese government, sparked hopes of renewed Chinese ambition at UN climate talks last week in Bonn.

“The non-fossil fuel target of 25% non fossil energy is a little more ambitious,” said Fekete. “You see a decrease in trends, but still very much increasing.” These hypothetical policies, though they would be the most ambitious implemented by China so far, would still require a sharp decrease in emissions after 2030, she added.

Their analysis also found that new US regulations for coal-fired power plants—Obama’s most ambitious climate policy so far—would fail to put the US on course to decrease emissions below 1990 levels. The US says it is on track to reach its 17% reduction goal.

The willingness of countries to reduce their emissions is important at this stage, as it will influence the shape of the UN climate change deal, which is the subject of negotiations this week in Bonn.

Though many hope the deal will be legally binding in some form, the length of its commitments is still being discussed.

A commitment period longer than 10 years risks locking in low level of ambition on tackling climate change, while short-term targets will not give the policy certainty required by governments and business for steep decarbonisation.

At both an international and domestic level, divisions remain over how far each country should be expected to cut emissions.

Speaking in Bonn on Friday, China’s lead negotiator Xie Zhenhua said, “We are experiencing a lot of dissenting views and disagreement in China” over what the country’s contribution should be to a UN climate deal, set to be signed off in Paris in 2015.

“My suggestion would be to have a very strong long-term targets and then very good and compatible short term targets,” said Fekete, as this would allow the flexibility to adjust demands as countries develop.