UN set of targets has been whittled down to 17, but arguments rage over what should be included 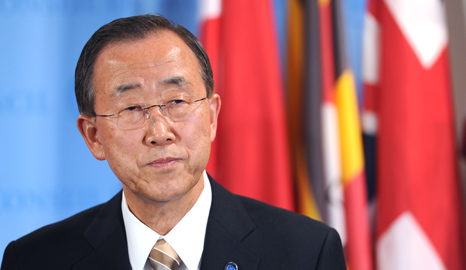 Ban-Ki Moon has made the SDGs a key goal for his tenure as Secretary General (Pic: UN Photos)

UN envoys developing a set of Sustainable Development Goals to be agreed in 2015 have listed ‘action on climate change’ as one of their 17 main goals.

This will be seen as significant, given stiff opposition from countries such as Saudi Arabia to the inclusion of global emission reduction efforts in the SDGs.

Goal 13 calls for signatories to ‘Promote actions at all levels to address climate change’.

Countries agreed to deliver the non-binding SDGs at the 2012 Rio+20 Earth Summit, replacing the eight Millennium Development Goals (MDGs) when they expire next year.

The presence of a global warming goal has been broadly welcomed by civil society observers following the SDGs, which will likely be signed off two months before a UN climate deal is agreed in Paris.

“There are some member states who say we shouldn’t prejudge the UNFCCC, but we believe they can complement each other,” Oxfam economic advisor David Taylor told RTCC.

“This is not the place to put binding emissions cuts in, but we can signal political agreement that we want to commit to a world where temperatures doesn’t rise by more than 1.5C.”

The ‘zero draft document’ currently lists an ‘x’ where a temperature limit should be, mindful of the ongoing debate over at UN climate talks on what a realistic target should be.

But it does stress the need for building resilience and adaptive capacity, as well as introducing ‘instruments’ to incentivise investment, although the date for this to take place reads ‘20xx’.

So far talks have taken place within an ‘open working group’, with 30 country coalitions feeding in their ideas and participating in public discussions.

And a ‘high level panel’ comprised of the heads of government from Liberia, Indonesia and the UK has highlighted areas of concern for leaders ahead of further talks.

“Above all, there is one trend – climate change – which will determine whether or not we can deliver on our ambitions,” warned Ellen Johnson Sirleaf, Susilo Bambang Yudhoyono and David Cameron in their report.

Tougher negotiations are set to resume later this year where the 17 goals are reduced to 10 or 12.

This is likely to come under pressure during further talks, with Mustafizur Rahman, Bangladesh’s UN envoy noting the “scepticism expressed by some colleagues” over its presence.

A March 2014 submission from Poland and Romania neatly sums up this line of argument: “the way forward in relation to climate change is to actively mainstream climate related actions in several goals and targets,” they argue.

Saudi Arabia’s March contribution is more blunt: “It is our belief climate change should not be a stand along goal,” it say, suggesting it could interfere with UNFCCC negotiations.

Oxfam’s Taylor says the NGO isn’t against the idea of losing a single climate target, but only on the condition it is integrated into the final set that emerges next September.

He said: “For the time being, we’re advocating it should be a stand-alone goal because it would should leadership if the world announces a set of goals that says reducing inequality and climate change are priorities. That’s why we welcome it’s in there.”