Renewables hit new record in 2013, accounting for over 56% of new power capacity across the world 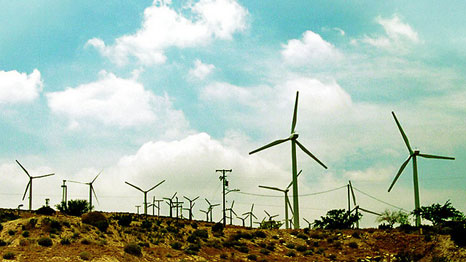 Renewable energy capacity grew by 8.3% in 2013, contributing over half of the net additions to global power capacity, according to a new report

A total of 144 countries provide support to renewable energy and have targets in place, says the report, which was assembled by researchers from the Renewable Energy Policy Network for the 21st Century (REN21).

The report will be released on Wednesday in New York at the UN’s Sustainable Energy for All Forum, which is an opportunity for countries to discuss progress on sustainable energy, two years on from the Rio+20 summit.

It was at the 2012 summit that world leaders declared they would act to make ‘sustainable energy for all’ a reality to help reach development goals.

Arthouros Zervos, Chair of REN21, said global perceptions of renewable energy are shifting, but that policy is key to cementing a long term shift.

“Over the last 10 years, continuing technology advances and rapid deployment of many renewable energy technologies have demonstrated that the question is no longer whether renewables have a role to play in the provision of energy services, but rather how we can best increase the current pace to achieve a 100% renewables future with full energy access for all.”

He added: “For this to be become reality, current thinking needs to change: continuing the status quo of a patchwork of policies and actions is no longer sufficient.”

This view was echoed in a report on Tuesday from the IEA, which said spending on renewables and energy efficiency needs to rise threefold over the next two decades to curb use of fossil fuels.

The report says that increasing support for renewables in the developing world contrasts with lower subsidies in some European countries and the US, and increasing policy uncertainty.

So far, support for renewables has helped increase the capacity of wind, solar, hydro and biomass to 1,560 GW, accounting for 22% of the world’s power output, and employing 6.5 million people, the report added.

China, the US, Brazil, Canada and Germany ranked the best overall for installing new renewable power capacity, while Uruguay, Mauritius and Costa Rica were the top countries for investment in renewables relative to their annual GDP.

On Tuesday, China said it would implement a nationwide emissions cap by 2016.

New commitments to renewable energy could be considered by countries as a possible contribution to a landmark UN climate summit to be held in New York in September.

UN Secretary General Ban Ki-moon has invited leaders to bring “bold pledges” to the meeting to build momentum ahead of landmark climate talks in Paris at the end of next year, where countries may agree a successor to the Kyoto Protocol.