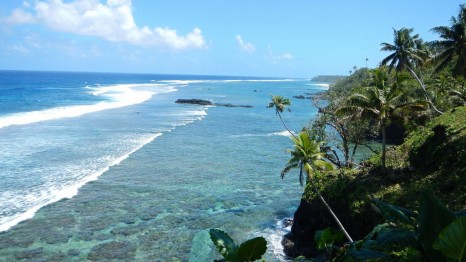 The Alliance of Small Island States (AOSIS) was commenting ahead of the next round of UN climate talks, from June 4-15, which are meant to lay the groundwork for a global deal next year.

The focus of a new deal will include a new round of carbon emissions targets from 2020-2030.

World leaders will also decide whether a present agreement that warming should not exceed 2C above pre-industrial levels is ambitious enough.

They will base that decision on a present expert review of the goal, called a “structured expert dialogue”, timed to coincide with the publication of a recent report by the Intergovernmental Panel on Climate Change (IPCC) which found that the evidence for climate change was stronger than ever.

Countries will decide, for example, whether the goal should be strengthened, to limit global average warming to 1.5C.

In their submission to next week’s talks, AOSIS listed a number of reasons why the world should limit warming to 1.5C, including to slow sea level rise and ocean acidification and to protect coral reefs.

“The difference between impacts of … a long term temperature increase of 1.5 degrees above pre‐industrial levels and … 2 degrees Celsius is enormous, in terms of the additional burden such added impacts would imply,” they said.

They quoted the recent IPCC report, and research published last year which said that sea levels would rise by 2.3 metres for every 1C rise in temperatures in the long term, implying a serious impact on low-lying islands from sustained 2C warming over millennia.

And they quoted recent research, published in March in the journal Environmental Research Letters, which showed that a third or more of the territory of many small island states would be underwater after sustained 2C warming over two millennia.

Some scientists say that a 1.5C warming threshold is already out of reach, given 0.8 degrees warming has already taken place, and there is inertia where the Earth is still warming in response to greenhouse gases already in the atmosphere. Additional warming is also expected as countries reduce local air pollution which presently reflects light back into space.

The United States and the European Union have already said that the IPCC report should be a key input in the review, without suggesting that the 2C target should be strengthened.

In other submissions ahead of the Bonn talks, Mexico said that a new climate agreement could be a legally binding decision under the existing 1992 Convention on Climate Change.

That would avoid writing a new treaty or protocol, enabling countries to sidestep the need for ratification of a deal by national parliaments. US ratification of the 1997 Kyoto Protocol foundered in Congress, where it was roundly defeated.

Countries might agree a new annex under the existing Convention, for example, which included carbon emissions targets and could be updated from time to time according to the latest science on the urgency to tackle the climate problem.

“Mexico proposes to entrust a group of legal experts to draw a list of instruments that … work without being subject to the rigorous process of amendments that require parliamentary approval, such as in the areas of trade law, certain environmental agreements, and illicit drugs,” it said in its submission.

“One alternative could be annexes that can be updated on a regular basis.”