Light, fast, strong and built from natural materials, bamboo bikes are an example of a greener and healthier future 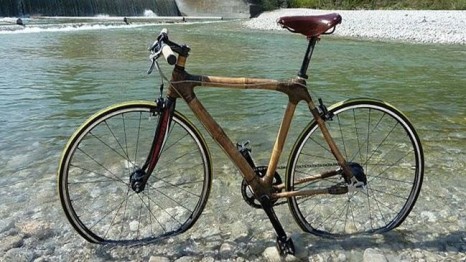 Parked conspicuously in a conference’s exhibition hall this week, between cubicles screening videos of case studies and offering piles of reports, was a rugged bicycle that was turning more heads than spokes.

The burly bicycle’s handsome brown frame was made mostly of bamboo. It’s a low-cost and fuel-free mode of transportation that was built as part of a grassroots initiative in Ghana that’s growing like a weed.

“In Africa, you can throw anything on the ground, and it will grow,” said Kemi Fadojutimi, a director of the Ghana Bamboo Bikes Initiative. “It’s the same with bamboo – bamboo grows everywhere, and we don’t do anything with it.”

The bike was hauled to the Global Environment Facility Assembly in Mexico to show off a success story of a small grants programme run by a group that administers billions of dollars worth of global pledges under various environmental treaties.

Since the GEF small grants programme’s first pilot projects in 1992, it has funneled $1 billion into 20,000 projects across more than 100 countries.

It also opened a bamboo-bike production factory in the Ashanti region capital of Kumasi, where about two-dozen people are now employed.

Fadojutimi said the factory has produced 500 bicycles so far, which are being sold throughout Africa. The bikes are helping women haul water and other commodities, and they are helping children reach far-flung schools.

“In Africa, our roads are not really friendly, but this bicycle is so strong,” Fadojutimi said. “This is eco-friendly. It’s not polluting the air. It’s a means for the rural villagers to transport from village to town.”

Now that the initiative has a workforce and bamboo plantation in place, it is working with Cornell University researchers to try to figure out how to locally produce small metal components that are currently being imported from China.