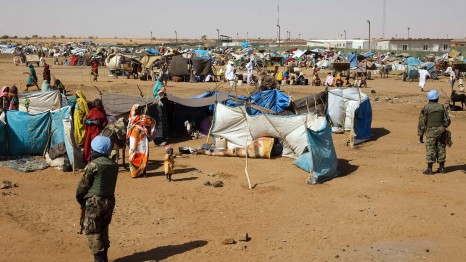 The current conflict in South Sudan has forced thousands to rely on UN camps for safety and food (Pic: UN Photos)

Climate change is exacerbating the civil war in South Sudan, according to the country’s environment minister, Deng Deng Hoc Yai.

He warned that the environmental damage caused by global warming was increasing the suffering that war was already causing in the strife-ridden country, worsening food shortages and building pressure on urban areas.

According to the UN, the number of internally displaced people in South Sudan as a result of the conflict has grown by 46,000 people to 1,005,096 in the past month.

This has led to an unplanned expansion of cities, which creates environments poorly adapted to the impacts of climate change, which can put pressure on water and energy infrastructure within build up areas. Those left without energy resort to cutting wood, he said, which can worsen the problem of deforestation.

In the capital city of Juba, Hoc Yai told RTCC, displaced people had led to “a lot of houses being constructed without proper planning” and that the government must “address the issue of town planning as an integral part of our environment policy.”

Meanwhile, flooding has increased problems of food scarcity, which has burdened the country since war broke out, due to the difficulty of farming in war torn areas.

While most credit the current conflict to ethnic tensions and a dispute between the President and his deputy, the situation in South Sudan adds credence to scientists’ theories that climate change can act as a “threat multiplier”, aggravating the effects of pre-existing violence and triggering further tension, creating security threats in vulnerable countries.

Politicians are also beginning to take note of the security implications of climate change, with US Secretary of State John Kerry warning that it has become the “world’s most fearsome weapon of mass destruction”.

Yai added that the situation called for the international community to address climate and conflict in a more integrated manner, recognising the links between the two.

“Conflicts aggravate the climate defence on the ground, and therefore we need a coordinated approach where you address issues of conflict and climate as one,” he said.

“By preventing conflicts we can also protect our environment, because in an environment of civil war like the one in South Sudan, the rebels are free to inflict any damage on the environment unchecked and without accountability.

“It is not only in South Sudan, but many conflict affected countries have experience of environmental degradation on a large scale.”

But war can also act as an opportunity for countries to rebuild in a way that will help them to deal with the impacts of climate change, said Haddijatou Jallow, who leads the Environmental Protection Agency in Sierra Leone, another country to have recently experienced a civil war.

She told RTCC that rebuilding the country almost from scratch after the destruction caused by eleven years of violence had allowed it to embed climate into its constitution, including the 2008 Environment Protection Agency Act.

“What war does, it reduces you to zero, so you have to go back to the drawing board and literally start all over again,” she said.

“Starting all over again, that is an opportunity again to build adaptive measures, mitigation measures, and ensure that you put in mechanisms that will lessen the impacts of climate change.”

She added that climate measures had contributed to the country’s economic boom—a growth of around 17% in 2002, the year in which the civil war ended—although the immediate concerns of the population could still threaten to overshadow the environmental agenda.

“We recognise there’s an inter-linkage between protection of the environment and sustainable development,” she said.

“However, you’ve got to understand that for a majority of the population, their thoughts are of the benefits, the benefits of now, the benefits that the mining company will give you in respect of where they’re going to conduct activities.