Walmart: Tackling climate change is not a PR stunt 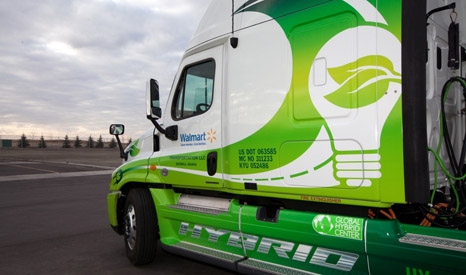 Walmart has started to roll out a fleet of hybrid trucks to boost its logistics chart in (Pic: Walmart)

Walmart’s fight against climate change is not an elaborate PR stunt, but a sensible business strategy, according to the company’s vice president Manuel Gómez Peña.

Any company that hopes to stay in business in the long term must operate sustainably, said Peña, who leads the environmental programmes of Walmart, the world’s largest retailer.

“It’s not something that we’re doing for public relations or it is the nice thing to do. It’s now making business sense,” he said, adding that the impacts of climate change were already having an impact on the economy.

His comments counter the claims of those who say that Walmart’s latest moment in the climate spotlight—hosting President Barack Obama as he unveiled his latest set of solar policies—was exactly that.

Speaking at a California store earlier this month, Obama said that Walmart was leading the shift towards clean energy, which would ultimately save money and create jobs.

“That’s what Wal-Mart understands, and Wal-Mart’s pretty good at counting its pennies,” said Obama. On the same day, Walmart pledged to double the number of onsite energy projects at its US stores.

Yet critics pointed out that, despite a 100% renewable goal, EPA figures show that Walmart currently only receives 3% of its energy is sourced from clean technology produced onsite.

Speaking to RTCC, Peña said that the company was currently focused on reducing its energy intensity, rather than putting an absolute gap on its greenhouse gas emissions, and that its intention to procure 7000 gigawatts of renewable energy by 2020 meant that Walmart’s energy intensity was projected to drop by 20%. 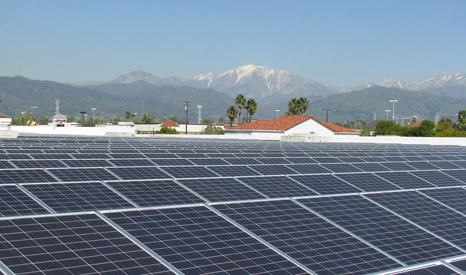 The chain has a goal of generating 100% of its energy from renewable sources (Pic: Walmart/California)

This means that if the company itself grows by more than 20%, then Walmart’s emissions would still increase. But Peña said that a global trend in decoupling emissions from growth would allow “our greenhouse gas emissions to even decrease” by 2020.

Peter Seligmann, CEO of Conservation International, voiced his support of Walmart’s sustainability record during a meeting of the Global Environment Facility taking place this week in Mexico, saying that its effort were part of a wider trend of companies “placing concerns about sustainability into their DNA.”

He said: “Walmart has made a commitment to sustainability that is not done out of charity. They recognise they want to sell a lot of goods and they cannot have goods if ecosystems implode and if the climate shifts so what they grow cannot be grown.

“They do it out of self interest.”

Greater collaboration between businesses, governments and NGOs is currently the best action that can be taken to further the climate agenda, said Peña, who said that Walmart was “close to the White house and the Environmental Protection Agency in trying to support their initiatives”, adding that they shared a “common agenda”.

He said that there were plenty of opportunities for businesses to adopt a sustainable pathway under the Obama administration, and that taking advantage of them was “just a matter of being creative”.

An unofficial coalition between the world’s largest businesses including Walmart and Unilever was also helping, he added, as it allowed them to share best practices and make common pledges.

A climate summit to be hosted by UN Secretary General Ban Ki-moon in September to which business leaders have been invited alongside heads of states will determine the level of ambition of these common pledges.