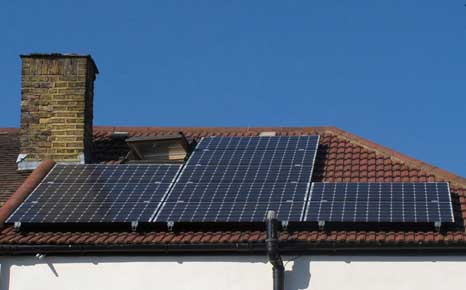 In first place is Germany, with a total 36 GW installed, while China is growing fastest, adding around 11.3 GW just last year according to the European Photovoltaic Industry Association (EPIA).

Britain’s installed capacity in the first quarter this year rose by 189 megawatts, according to the new data published by the Department for Energy and Climate Change (DECC) on Thursday, which is the slowest first quarter increase since 2011.

Britain has three support schemes: a feed-in tariff scheme which pays a price premium for smaller installations, and a market in green certificates called the renewables obligation scheme (ROC) for larger farms.

Newer installations are still awaiting accreditation under either scheme, shown in the chart below.

DECC recently said that as of the end of March there were 1.2 GW of large, ground-mounted solar farms awaiting accreditation, implying that total installed capacity may reach 4 GW this year.

The success of the British solar power industry may sow the seeds of its own downfall, however, because the government has imposed spending limits under its Levy Control Framework (LCF), which includes subsidies raised from consumer energy bills.

Britain earlier this month announced plans, which it is presently consulting on, to scrap from next year support for large solar power farms under its ROC scheme.

Large farms over 5 megawatts would still be able to claim subsidies under a forthcoming “contracts for difference” scheme.

But under that scheme, as an “established technology” solar would have to compete for subsidies with onshore wind, which is cheaper and so may muscle out further large-scale solar installations.

“(If present support continues) we could see more than 5GW by 2017, which exceeds by some margin the upper end of the potential range set out in the Delivery Plan for 2020,” DECC said in its recent consultation on scrapping ROC solar subsidies.

“This is more than we can afford and would have adverse consequences for Government’s management and use of the LCF as a whole.”

Other subsidies for smaller scale solar power installations are already subject to built-in reductions over time, which vary according to growth in capacity, with faster cuts the faster the industry grows.

Every solar subsidy, or tariff, falls by a minimum of 3.5% every nine months, under that degression policy.