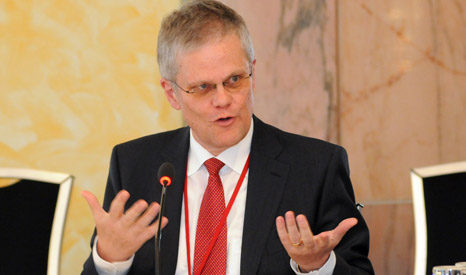 By Gerard Wynn in Bonn

Ambitious action under a new global climate deal will cut the cost of reaching zero greenhouse gas emissions by the end of this century, said the UN official responsible for driving the negotiations.

The United Nations is gearing up for a climate deal to be agreed next year, which will set ambition for emissions cuts from 2020 to 2030.

Global net greenhouse gas emissions will have to fall to zero by the end of the century, to keep average surface warming below 2C, found a report by the Intergovernmental Panel on Climate Change (IPCC), published last month.

Cutting emissions faster in the 2020s would reduce the cost of that challenging task, the IPCC showed.

That is because human activities cause greenhouse gases to accumulate in the atmosphere, requiring ever steeper emissions cuts to limit the total amount of warming they cause.

The only economic way presently to remove carbon dioxide (CO2) from the atmosphere is to expand the area of vegetation including forests, which can mop up CO2, but space constraints limit such potential, throwing the emphasis on cutting emissions.

“You will come to the point this century when you have to take out as much carbon dioxide from the atmosphere as you put in,” said Halldor Thorgeirsson, director for implementation strategy at the secretariat of the UN framework convention on climate change (UNFCCC).

“We’re not talking about minor adjustments (in emissions) but transformation. The sooner you start the more economic it will be.”

Countries have agreed the 2C warming target as a threshold for more dangerous climate change.

The IPCC publishes an update on the science of climate change every six years, and last month reported that carbon emissions would have to fall to zero – or even below, meaning a net absorption by forests – by the end of this century.

“Scenarios consistent with a likely chance to keep temperature change below 2C … are characterized by lower global greenhouse gas emissions in 2050 than in 2010 … and emissions levels near zero or below in 2100,” the IPCC report said.

“Delaying mitigation efforts … through 2030 is estimated to substantially increase the difficulty of the transition to low longer-term emissions levels and narrow the range of options consistent with maintaining temperature change below 2C relative to pre-industrial levels.”

The IPCC report concluded that emissions of all greenhouse gases, including CO2, methane and others, should not exceed 50 billion tonnes in 2030, to have a “cost effective” chance of staying within the 2C warming limit.

But such emissions are already above 50 billion tonnes, given that they reached 49 billion tonnes in 2010, according to the IPCC, and have since continued to rise.

Annual global emissions must therefore fall over the next 15 years, even as India and China continue to grow their economies in part by burning fossil fuels, underlining the scale of the challenge.

The IPCC report showed that if greenhouse gas emissions exceeded 50 billion tonnes in 2030, the world subsequently would have to cut these by around 5-6 percent annually to stay on a 2C track.

In the teeth of the financial crisis when the global economy contracted in 2009, annual emissions only fell by a little over 1 percent, showing the importance of agreeing ambitious carbon cuts sooner than later, to avoid a more costly reckoning in future decades.