US military officials say threat from global warming is evident, calling for focus on efficiency and clean energy systems 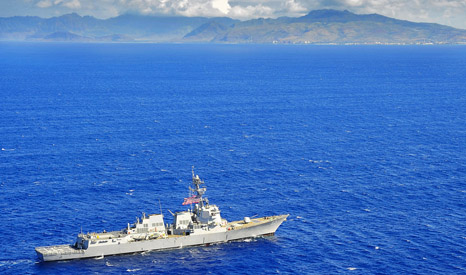 The threats posed by climate change are “overwhelmingly clear” to everyone at US military headquarters, a senior Pentagon official has told a Senate enquiry.

While many leading US politicians remain sceptical over the science behind global warming, Vice Admiral Dennis McGinn, Assistant Secretary of the Navy, said military planners were convinced, and concerned.

“If you wait for 100% certainty on the battlefield, something bad is going to happen,” he said, quoting former US chief of staff Gordon Sullivan.

“We look for indicators, warnings, reasons to take action that are prudent. Not to place a bet on a certainty – but it is overwhelmingly clear to everyone in the Pentagon and majority of folks in our nation that climate change is happening and we need to do something about it.”

McGinn said the Pentagon was reassessing how secure its bases are in light of future climate impacts, and is especially worried about the effect sea level rise could have on naval dockyards.

“We are building places that will be safe when the wind is howling and sea level rise that is caused by storm surges like Superstorm Sandy,” he added. “We are dealing with this as a serious threat because it is.”

Also speaking at the enquiry, arranged by the Senate Appropriations Committee’s defense subcommittee, Daniel Chiu, deputy assistant secretary of defense for strategy, described climate change as a “threat multiplier”, and one of many future “considerations” planners are taking into account.

He cited the Arctic as an area the Pentagon was increasingly focused on, referring to the scenarios melting ice presented as a “decades-long dynamic”

The comments highlight the marked attitudes to climate change between the military and many Republican politicians on Capitol Hill, who remain intensely hostile to any measures aimed at cutting US greenhouse gas emissions.

An increasing number of attacks against President Barack Obama’s new emission standards for power plants are expected over the summer, ahead of November’s mid-term elections.

On Monday, the Environmental Protection Agency is expected to release proposals to penalise polluting energy plants, a move that will likely hit coal-producing states hard.

Last week the House of Representatives passed an amendment aimed at stopping the Department of Defense from using any funds to address climate change.

“None of the funds authorized to be appropriated or otherwise made available by this Act may be used to implement the US Global Change Research Program National Climate Assessment, the Intergovernmental Panel on Climate Change’s Fifth Assessment Report,” it read.

Released earlier in May, the US National Climate Assessment warned widespread and visible impacts are already being felt by US citizens.

US average temperatures have risen from 0.7C to 1.1C since 1895 it said, a warming trend that was set to continue over the coming decades.

McGinn’s comments are the latest from senior military officials, evidently concerned that some US politicians are keen to dismiss the threat posed by rising carbon emissions.

This month sixteen retired generals and admirals on the non-profit CNA Military Advisory Board published a 47-page report outlining why climate change is a national security risk.

“Even though we may not have 100% certainty as to the cause or even the exact magnitude of the impacts, the risks associated with projected climate change warrant taking action today to plan and prepare for changes in our communities, at home and abroad,” the said.

“If we do nothing and there is no agreement, we could go up to more alarming scenarios. Then even the military, particularly with the budgets we have at the moment, could be somewhat overwhelmed,” he said.

The US military is the country’s single largest energy consumer, which comes with an annual bill of $20 billion. In Afghanistan alone it uses 9 million barrels of oil a year.

In 2012 the White House announced the military aimed to develop 3 gigawatts of solar, wind, geothermal and biomass on bases by 2025.

In April this year the Pentagon released its own energy strategy, outlining how it plans to invest in more efficient transport and weapons systems, and programmes to promote “energy as a mission essential resource”.

“We are attacking efficiency vigorously,” said McGinn, adding tidal power and hydro are also on the agenda for future investments.

“The other equally important dynamic in achieving efficiency is culture – just letting our sailors and marines understand that energy is a war fighting necessity, and we can get more fight for less fuel if we are wise in how we use the equipment we have today.”