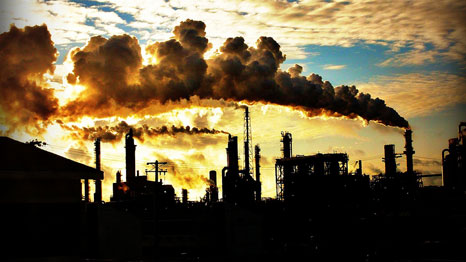 A shipment of oil from Canadian tar sands is due to arrive in Europe next week – the first time that the highly polluting fossil fuel has made its way into the continent.

The delivery will give rise to fears that Europe is now gearing up to take advantage of Canada’s oil reserves, creating a crucial market for the polluting fuel in the face of declining US demand and providing an incentive for Canadian companies to scale up production of the oil.

On 29 May, between 500,000 to 600,000 barrels of this Canadian crude oil are scheduled to arrive in the Bilbao port of Spain, which will then be transported into refineries owned by Spanish oil company Repsol.

“This would totally undermine the reductions that the EU is aiming at,” Franziska Achterberg, Greenpeace EU energy and transport policy director, told RTCC.

Tar sands are one of the most polluting and controversial forms of fossil fuel. A European Commission study found that tar sands are 23% more greenhouse gas intensive than conventional oil.

Fuel suppliers are bound under EU rules to decrease the carbon intensity of fuels 6% by 2020. If tar sands were to flood into the European markets, it would become more difficult and expensive to achieve this target.

Analysis released earlier this year by the Natural Resources Defense Council found that Europe is likely to get up to 6.7% of its crude oil and transport fuels from Canadian tar sands by 2020. This would raise the greenhouse gas intensity of Europe’s fuels 1.5% by 2020, or a quarter of the overall reduction target. 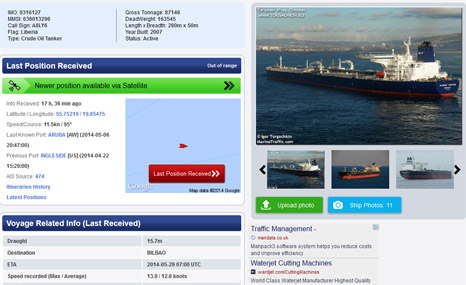 According to marinetraffic.com the Aleksey Kosygin will stop off at Klaipeda in Lithuania before heading to Bilbao

So far, EU countries have been unable to accept shipments of Canadian tar sands. This heavy form of oil needs extra processing to convert the crude into useable form – a complicated and energy intensive process, which European refineries have so far been unable to provide.

But that is changing, as European refineries invest heavily in upgrades that will allow them to receive this oil. “This is a test for the refining process, whether Europe can actually refine tar sands into fuel,” said Achterberg.

Repsol, who have purchased the oil, has several projects underway to increase its ability to process oil from tar sands, including one in Bilbao where the oil is to be delivered.

In Canada, major infrastructure projects are also being prepared that will allow oil to be piped to the coast for export, including the Energy East and the controversial Keystone XL Pipeline.

According to Torbjørn Kjus, an oil analyst at DNB Markets, as long as Canadian tar sands prove economic, EU refineries will be happy to import it.

“To the refiner, it’ll just be the price you can get and the product you get after refining it, so they wouldn’t care what the source is. They wouldn’t think about the carbon content at all.”

He added that it is a “trend we might see more of” in Europe, as Canadian companies close in on the continent as a possible market for the product.

The EU is currently working on a Fuel Quality Directive that will discourage the import of tar sands, by requiring them to be labelled as 25% more polluting than conventional oil.

This would be a major disincentive, as suppliers of transport fuel work towards achieving the EU’s 6% emissions intensity reduction target.

But Canada has been lobbying against the new measures, saying that the industry would be “stigmatised”, and the directive was “unscientific, discriminatory and opaque”.

With Europeans voting on the next EU Parliament this week, MEP Gerben-Jan Gerbrandy, vice-chair of the Environment Committee, told RTCC that it was “important” that the Fuel Quality Directive was finalised soon in order to stave off the potential influx of Canadian crude oil.

He said: “As long as we do not have the right position towards tar sands it’s going to be very difficult to not import them into the European Union.”