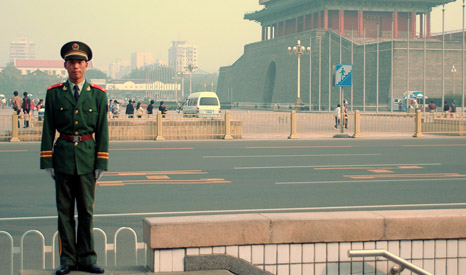 Air pollution is an increasing concern in China, leaving a haze hovering over most cities (Pic: Daniele Dalledonne/Flickr)

China’s policymakers are testing the potential for radical cuts in carbon emissions from the energy and industrial sectors, using an energy analysis tool developed in collaboration with Britain.

Britain developed its own “2050 Pathways” calculator in 2010, to allow academics and policymakers to test the potential for radical national carbon cuts in the wake of the UK’s ambitious Climate Change Act.

The country has now helped China develop its own version, in collaboration with the Energy Research Institute (ERI).

ERI is based within and provides advice to the country’s powerful energy policymaking body, the National Development and Reform Commission (NDRC).

The “China 2050 Pathways” tool is based on unpublished national energy and industrial data.

“The data for this calculator is from the institute and many experts give us their suggestions,” said Zhang Bo the developer of the pathway, at the “China 2050 Pathways Development Group”, in a brief email correspondence with RTCC.

The Chinese carbon pathways calculator certainly does not express government policy, but it does allow researchers and policymakers to test the carbon emissions outcomes of different policies. 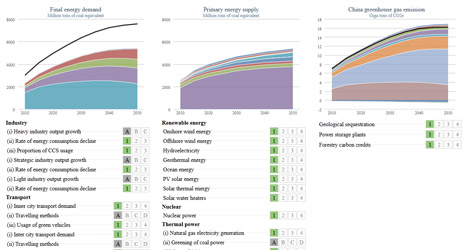 The calculator allows scientists to test a range of scenarios based on renewable technologies, demand and global factors

Zhang has developed his own, “Zhang Bo” pathway which appears to test an ambitious combination of energy and industrial policies which lead to sharp cuts in carbon emissions.

His pathway experiments with high levels of installed solar power and low levels of coal by 2050, for example.

The resulting carbon emissions trajectory sees carbon emissions peak at 8.3 billion tonnes in 2025, before falling rapidly to just under three quarters of present levels by the middle of the century.

The calculator calculates carbon emissions trajectories according to one of four scenarios for each of many variables, across energy, transport, industrial and urban sectors.

For example, it assumed less solar photovoltaic capacity in 2050 than the country already has, according to data from the European Photovoltaic Industry Association, at 10 gigawatts in 2050 compared with 19.6 GW at the end of 2013, respectively.

The most “optimistic” scenario used by the calculator sees emissions peak now, and fall to 6.9 billion tonnes in 2015, and continue to fall thereafter, to 1.8 billion tonnes or just a quarter of present levels by the middle of the century.

The scenarios assume the most ambitious uptake of low carbon energy and reduction in fossil fuels, according to technical possibilities without accounting for economic cost.

The calculator provides a detailed overview of each variable.

“In 2050, (hydrowpower) capacity reaches 690 kilowatts, the maximum capacity theorised for hydroelectricity in China,” it says of the most ambitious hydropower scenario, for example.