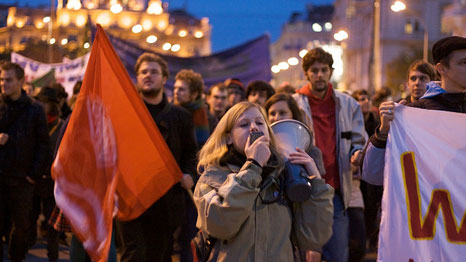 Activists have issued a “call to arms” on climate change, hoping to assemble tens of thousands of people in New York ahead of a landmark UN Summit in September.

Led by Bill McKibben, environmental activist and founder of the 350 campaign group, over a thousand people have already said they will take part in a march through New York on 20-21 September, hoping to send a message to world leaders that tough action is needed on climate change.

The march will take place ahead of a one-day UN climate summit, which will be hosted by UN Secretary General Ban Ki-moon on 23 September. He has asked leaders of governments, businesses and civil society to come equipped with “bold pledges” on how they will combat global warming.

People from across society will gather for the march, predicts McKibben, reflecting a groundswell of movement that is already underway to tackle climate change, such as divestment from fossil fuels and investment in clean energy.

“There will be clergy and laypeople from synagogues and churches and mosques, now rising in record numbers to say, “If the Bible means anything, it means that we need to care for the world God gave us.” And there will, of course, be scientists, saying, “What exactly don’t you understand about what we’ve been telling you for a quarter-century?” wrote McKibben in Rolling Stone magazine.

“And students will arrive from around the country, because who knows better how to cope with long bus rides and sleeping on floors – and who knows better that their very futures are at stake?

“…And then there will be those of us plain old middle-class Americans who may still benefit from our lives of cheap fossil fuel, but who just can’t stand to watch the world drift into chaos.”

Last year, tens of thousands of protesters marched on Washington DC in the largest environmental protest in the US to date, hoping to convince Obama to reject the Keystone XL Pipeline.

The September march will be more globally relevant, as Ban Ki-moon has raised expectations that world leaders from across the world will attend, in order to raise ambition ahead of the UN’s climate conference in Paris 2015, where all countries have agreed to sign off a legally binding deal to prevent dangerous global warming.