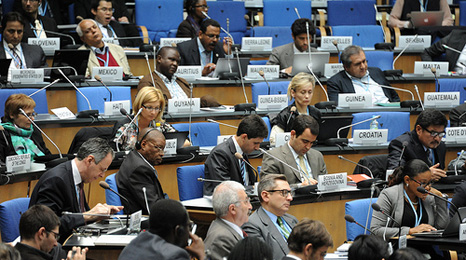 Only 43 of a possible 196 government ministers are currently scheduled to attend a special ‘high level’ session at the next round of UN climate change negotiations, aimed at boosting carbon cutting measures in the next seven years.

Hosted by Peru’s Environment Minister Manuel Pulgar Vidal, who will be President of the 2014 UN climate summit, the June meeting in Bonn is billed as an important step towards a proposed global climate deal in 2015.

China, the US, France and the EU are all billed to attend, but there appear to be no representatives from some of the world’s largest carbon polluters such as the UK, Russia, Australia, Brazil, India and South Africa.

Armenia, Rwanda, Afghanistan, Sudan, Luxembourg and the Marshall Islands are among the smaller nations sending delegations.

Unlike the previous round of talks in March, countries have been specifically requested to send a minister to the upcoming talks next month.  A poor show at the meeting will raise questions over how engaged many countries are in the UN process, which aims to deliver a draft text for the global deal by November.

So far only a few heads of state have confirmed they will attend Ban Ki-moon’s ‘leader’s summit’ on the sidelines of the UN General Assembly in September, although it would be a shock if many shun the event.

Most parties to the UN will send negotiating teams to the Bonn talks, which last for around two weeks, and are seen as a significant stepping stone towards the Lima summit in December.

According to the agenda, attending ministers will be expected to explain how they plan to boost their climate ambition ahead of 2020, and offer ‘political direction’ to negotiators drafting the text.

Questions they are invited to answer include:

– What political actions are being taken and what further actions will be needed to ensure full implementation of pledges made and the unlocking of untapped mitigation potential in the period up to 2020?

– What political implications of the IPCC findings do ministers see for the recommended aggregate level of ambition on mitigation and adaptation and on finance, technology and capacity-building support to developing countries?

– What political steps are ministers initiating in order to arrive at ambitious nationally determined contributions?

– How can international cooperation help to enable and accelerate domestic efforts? How does this impact the shape and content of the 2015 agreement? What should be its key features?

So far only the EU has given a clear indication of the levels of emission cuts it is willing to consider beyond 2020, with a 40% GHG reduction goal for 2030.

The US and China, the world’s largest carbon emitters, are expected to reveal their contributions in the first quarter of 2015, which may prompt other countries to follow suit.